As he accepted the Democratic presidential nomination, Biden traced lessons he’d learned about dignity from his father; about overcoming grief from the deaths of his wife and daughter and, decades later, his son; about the presidency from Barack Obama; and about reckoning with racism from former Rep. John Lewis and a 6-year-old girl. He explained how it all led him to a moment for which his party’s voters decided Biden, at 77 years old and after 47 years in national politics, was made.
“This is our moment to make hope and history rhyme,” he said, quoting the Irish poet Seamus Heaney.
Here are eight takeaways from the fourth and final night of the Democratic National Convention:

‘An ally of the light, not the darkness’

Read More
Biden didn’t use Donald Trump’s name, only referring to him as “the current president.” But his speech, from the outset, cast Trump as a failing, self-obsessed figure willing to ignite hatred to advance his own political ends.
“I will draw on the best of us, not the worst. I will be an ally of the light, not of the darkness,” Biden said in his opening minute. 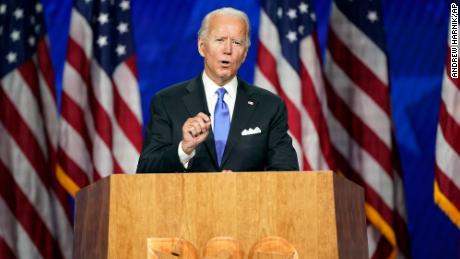 Voices from Fox News to MSNBC praise Joe Biden’s acceptance speech
He lacerated Trump’s handling of the coronavirus pandemic and his foreign policy efforts, and pointed to staggering job losses amid searing economic inequality. But he began and ended his speech with a call to overcome division.
“With passion and purpose, let us begin — you and I together, one nation, under God — united in our love for America and united in our love for each other,” he said. “For love is more powerful than hate. Hope is more powerful than fear. Light is more powerful than dark.”
“This is our moment,” Biden said. This is our mission.”

‘Her words burrowed deep into my heart’

From the outset of his campaign, Biden has said he was motivated to run for president by Trump’s response to white supremacists clashing with counter-protesters in Charlottesville, Virginia, in 2017. The President said there were “very fine people on both sides.”
“At that moment, I knew I’d have to run,” Biden said Thursday night. “My father taught us that silence was complicity. And I could not remain silent or complicit.”
As protests against racial injustice and police brutality have blanketed the nation, Biden said he believes recent moments — George Floyd’s killing in Minneapolis in May and civil rights icon John Lewis’ death in July — have led to a time in which “America is ready to, in John’s words, to lay down ‘the heavy burdens of hate at last’ and to do the hard work of rooting out our systemic racism.”
Biden said he would never forget what Floyd’s 6-year-old daughter Gianna told him the day before Floyd’s funeral in Houston.
“She looked into my eyes and said, ‘Daddy changed the world,'” Biden said. “Her words burrowed deep into my heart.”

‘We were members of the same club: We stutter’

Thirteen-year-old Brayden Harrington spoke for just two minutes, but — as he battled and overcame his stutter — he delivered one of the convention’s most moving moments.
Biden, too, overcame his stutter. The two met while Biden campaigned in New Hampshire, where Biden told him “that we were members of the same club: we stutter,” Harrington said. After learning the boy was struggling with a stutter, he invited him backstage, where the two spoke for half an hour, with Biden showing Harrington how he marked up his own speeches with breaks to make delivering them easier.
“So I did the same thing today. And now I’m here talking to you today about the future, about our future,” Harrington said. “I’m just a regular kid, and in a short amount of time Joe Biden made me more confident about something that’s bothered me my whole life.” 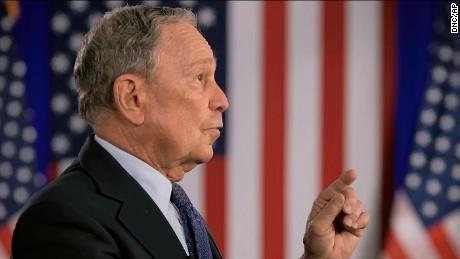 Michael Bloomberg’s presidential primary campaign, premised on the idea that he — more than Biden — could appeal to moderate Democrats, was a nearly billion-dollar flop.
And yet, at a convention that didn’t have time for so many popular, young and dynamic Democratic leaders, there stood the billionaire former New York mayor, the final politician to speak before Biden formally accepted the party’s presidential nomination.
Bloomberg’s inclusion rankled all manner of Democrats, perhaps none more than former members of his campaign. A group of them wrote an open letter to Democratic National Committee chair Tom Perez asking that he be pulled from the convention program. Bloomberg has been accused of stiffing staffers who say they were promised work through November.
Speaking on Thursday night, at the DNC for the second consecutive time, Bloomberg delivered a familiar indictment of Trump — from the point of view of a boss describing him as a bad employee who tweets more than he works, and doesn’t deserve to be “rehired” by American voters.
It was a speech viewers will likely be quick to forget and organizers, when they look back, will probably regret allowing to go forward.

The memory of Beau Biden, Joe Biden’s late son who died of brain cancer in 2015, loomed over the entire night.
Convention organizers, during a portion of the night focused on veterans, put together a video honoring his life. When Biden’s two living children, Hunter and Ashley, introduced their father, they allowed Beau to have the last word through video of an earlier introduction the one-time Delaware attorney general gave at a previous DNC. And multiple speakers — including fellow veterans Illinois Sen. Tammy Duckworth and former South Bend, Indiana, Mayor Pete Buttigieg — related their respect for Biden to the memory of Beau. 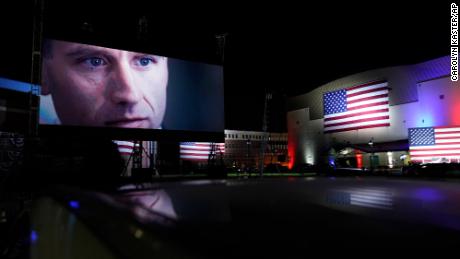 The presence of Beau Biden was no surprise: The former vice president still carries his late son’s rosary with him every day.
“Beau Biden,” said Buttigieg, “lived a life of service, in office and in uniform.”

During a convention where nearly everyone took shots at Trump, Duckworth delivered one of the most stinging eviscerations of the President.
An Army veteran who lost both of her legs while serving in Iraq, Duckworth’s speech opened with a shot of her two prosthetic legs and the United States Capitol — a powerful symbol of both the senator’s past and current service. Then came her dressing down of Trump.
Duckworth labeled Trump the “coward in chief,” slamming him as someone who uses the military to “stroke his own ego” and questioning whether the President should remain in office for “four more minutes — let alone four more years.”
“Our troops,” said Duckworth, “deserve better.”

The final night of the Democratic convention confronted the historical inequities that have plagued this nation since its inception, by drawing the life of civil rights icon Lewis to the nation’s current reckoning on race.
Biden mentioned both “white supremacy” and “systemic racism” in his acceptance speech and included the current racial awakening caused by the death of Floyd at the hands of police as one of the four most urgent tasks facing the country.
The focus exemplified just how much had changed in the country in the last three months, and highlighted how Biden — a candidate who was propelled to the White House in large part because of the deep support he received from Black voters during the Democratic primary — acknowledged that cultural shift.
“People often think they can’t make a difference like our civil rights icons, but every person in the movement mattered,” said Atlanta Mayor Keisha Lance Bottoms, one of several Black women Biden vetted for vice president before selecting California Sen. Kamala Harris. “They, too, changed America. And so can we. The baton has now been passed to each of us.” 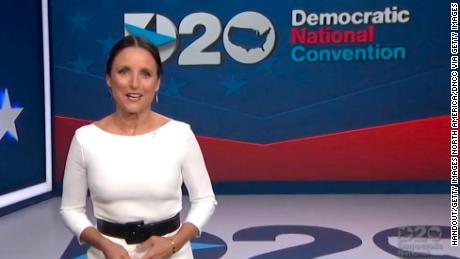 Julia Louis-Dreyfus starred in one of the best, most cutting satires of American political culture, a role and distinction that always made her an odd choice to host a self-serious event like the final night of this virtual convention.
Through about an hour on Thursday night, the former VEEP lead’s performance was dividing opinion on social media. Most of the reviews were poor, or confused, asking about the timing and tone of her jokes. Others seemed to enjoy her winking sprouts of levity, which broke up a series of alternatingly dark and somber speeches.
Whether it was planned or an in-game decision, Louis-Dreyfus appeared less as the night built up to Biden’s own speech. But before then, her droll asides and punchlines stood out — for better or worse.
Following a powerful clip that showed Biden discussing his faith and how it would guide him in office, a riff that former primary rival Beto O’Rourke told CNN months ago convinced him to endorse Biden, the camera cut back to Louis-Dreyfus.
She turned from the screen behind her and addressed the camera and … told a joke
“Joe Biden goes to church so regularly,” she said, “that he doesn’t even need tear gas and a bunch of federalized troops to help him get there.”
The reference to Trump’s infamous stroll from the White House, across Lafayette Square, to St. John’s Church in June, fell flat in the moment. And felt more out of place as she transitioned to a quick back-and-forth with Atlanta Mayor Keisha Lance Bottoms.
The subject: the voting rights legacy of the late Rep. John Lewis.