A version of this story appeared in CNN’s What Matters newsletter. To get it in your inbox, sign up for free here.
Here are some thoughts about the current state of the world after driving halfway across the country with my wife and three kids:
Covid is also an opportunity. While not a luxurious trip, the act of taking it was a luxury for us, since the newsletter can be written from anywhere and my wife’s work enables her to work remotely, too. I’ve never spent three weeks anywhere but my house in one sitting, so this trip was unlike any our family has ever taken.
I realize we are extremely fortunate to both have jobs at a time when so many Americans are looking for work.
Related: What health experts want you to know about travel and vacations
Read More
It’s hard to decide to travel. Despite an occasional piercing guilt about traveling during the pandemic, the time away from our house was much-needed. We’d all been cooped up together for months, and it’s been a real challenge figuring out what to do with these kids to keep them active and engaged. It’s always hot and often stormy in DC, but the pandemic has limited access to pools, and the camps to which we’d normally send our kids were either canceled or pared back. Plus, they hadn’t seen their West Coast grandparents in 10 months.
So, we poured the money we would have put into camps and childcare into a rental house, packed up our laptops to do work during the day, and set off to the lake to meet the grandparents in the sort-of middle part of the country.
This decision to see the grandparents was also difficult. Would we be putting them in danger? Would they be putting us in danger?
The question “When can I see my grandkids?” was the subject of a recent Dr. Sanjay Gupta podcast. It’s worth the listen.
Going to the bathroom takes on new meaning. Normally, you’d pull over and go wherever you stopped for gas. But these days, the dingy service station restroom makes you much more nervous. We spent much more time than we normally would thinking about bathroom breaks.
Related: US travel restrictions by state
Taco Bell can lead you to Rutherford B. Hayes. Coincidences are amazing. Close readers of this newsletter will remember I referred to the 1876 presidential election featuring Rutherford B. Hayes’ victory over Samuel Tilden after a special commission with a majority of Republicans gave the decision to Hayes, the Republican. It’s widely considered one of the most corrupt elections in US history and led to the end of Reconstruction — which led to the rise of Jim Crow laws. You can listen to this really interesting lecture on YouTube for a college-level overview by Roy Morris, Jr., who wrote the book “Fraud of the Century.” 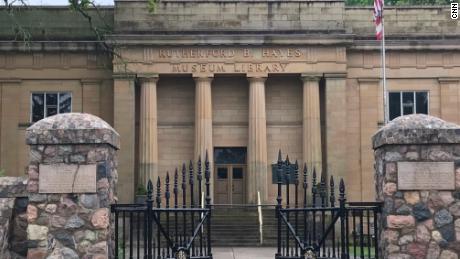 So imagine my surprise when we got off the freeway in Fremont, Ohio, in search of Taco Bell, and there was a sign for the Rutherford B. Hayes presidential library. What are the odds?!?! (I was substantially more excited about this development than my children or Rolo, the dog we adopted at the beginning of the pandemic, who traveled with us.) 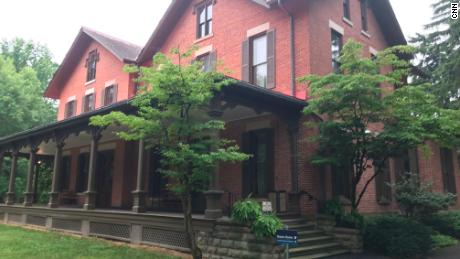 Follow your detours. Nerdy dad that I am, we immediately followed the signs to the library instead of Taco Bell. The library was closed due to the coronavirus, but we showed ourselves around the grounds at Spiegel Grove. This is a good place to remind everyone that one day there will be a Donald Trump presidential library. The Hayes library — unlike libraries for presidents since FDR — receives no federal funds, but it was, according to the website, the first presidential library. It’s an interesting distinction for a one-term president who didn’t win the popular vote or the Electoral College vote. He did have a very large red brick house, however, and a very productive post-presidency. 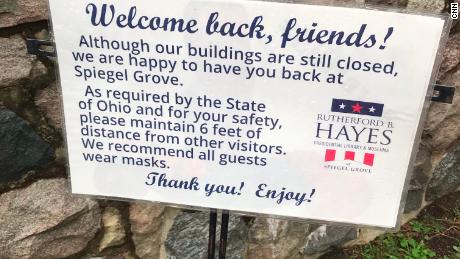 Indoor destinations are in trouble. We were unable to go inside the Hayes museum. Same with a lighthouse, which was closed. While there is a lot to do at the lake outdoors, it drove home the point that many indoor places aren’t currently available and probably won’t be for some time.
There needs to be more testing. We wanted to get Covid-19 tests before leaving. But we waited too long. I looked into going to a CVS, a doctor’s office and the city. But most required a referral for a test within days, and I had waited too long to schedule a pre-travel screening. Speaking to people who have been tested, it often takes more than a week to receive results. So, they’re not all that useful when it comes to clearing yourself to do something. It seems like a huge area for improvement until we have a vaccine.
Related: 90-minute tests that detect Covid-19 and other viruses to be rolled out in the UK
Hotels are not empty. We had planned to stop one night in South Bend, Indiana, but were booted from a hotel where we had a reservation because the room had been given away. We found another hotel, and that one was mostly full too. I was really surprised.
Youth sports are happening. People are traveling for them! The hotels were full because of a youth baseball tournament — I was gobsmacked by this since my kids’ soccer league still isn’t back. Plus, the NBA, MLB and NFL’s difficulties over safely returning has me wondering about teams of kids staying in hotels. There was no baseball tournament when we stopped in Pittsburgh on the return trip, but the hotel where we stayed was full of cars. I had been surprised by the tournament, but I was also surprised at the line of people we saw in line for water slides as we zipped past the Six Flags waterpark near Chicago.
The change crisis is real. I don’t often use cash, but I did notice — particularly at gas stations — signs notifying people that coin change would not be made. There’s a coin shortage because of Covid.
People wore masks indoors. This is not a scientific statement, but rather what I saw in Wisconsin, at rest stops and during single-night hotel stays in South Bend, Indiana, in early July and Pittsburgh in early August.
Many people weren’t wearing masks on the street. Stores and gas stations mostly required mask-wearing on my trip, but most people walking on the street in public areas were not. I’ve spent a fair amount of time paying attention to the Covid news and honestly, I’m not entirely clear whether you’re always supposed to wear a mask in an open-air setting when you’re six feet away from other people. But I can say that, for me, you feel much sillier wearing a mask when people around you are not.
Mask-wearing mandates are sort of like motorcycle helmets laws. I’ve never lived in a state that doesn’t require motorcycle helmets, but as I saw people chop by on Harleys in Wisconsin, I drew some parallels to the fact that some states require face masks in public and others do not. Wisconsin’s face mask mandate went into effect as we were leaving the state. I didn’t realize that in the late ’60s, the federal government pressured states to adopt helmet laws by attempting to withhold federal highway funds. That practice ended in the ’70s, according to the Governor’s Highway Safety Association, which endorses a universal helmet law. Today, 21 states have a universal helmet law, 28 have a partial law, and New Hampshire is the lone state without a law. Live free or die! Or, live free and die in a motorcycle accident? It also has no statewide mask-wearing mandate.
Related: These are the states requiring people to wear masks when out in public
Some restaurants and businesses are doing better than others at face masks and distance. We went out to eat. This felt almost naughty, but we sat outside and ate dinner several times. I felt much better in places where every server wore a mask, where only outdoor tables were in use and everyone was distanced. A lot of stores had hand sanitizer at the door. Most kept a limit on the number of people who could be inside.
Trump supporters still really love Trump. This is a non-scientific tally. But in a rural vacation town in Wisconsin, this normally city-going journalist noticed a clear advantage to Trump in yard signage. Although our street had a Biden sign, it was offset by a large “Trump 2020 No More Bullshit” flag a person was flying from their dock. At one gas station, they were selling Trump 2020 car magnets, and I could not find Biden ones. Wisconsin is a clear prize in 2020
“Tossup” state vacation. CNN rates Wisconsin as one of just six battleground states. The current handicap, according to our political team, assumes 268 electoral votes solidly or learning toward Biden and 170 solidly or leaning toward Trump. Do the math here.