The fact is that we no longer have one election day in this country, especially in the age of coronavirus. And with a record number of voters saying they’ll be voting via absentee (or mail) or early in-person, it could mean that President Donald Trump has less time to make up his deficit against former Vice President Joe Biden.
North Carolina is one of many states that starts sending its absentee ballots out more than a month before Election Day actually occurs. In fact, states containing more than a combined 350 electoral votes will begin shipping absentee ballots out to voters a month or before the election begins.
This list of states includes a number of contests that, at this point, look to be competitive on the presidential level: Florida, Georgia, Michigan, North Carolina, Ohio, Texas and Wisconsin. All of these battleground states except for Texas have no excuse absentee or mail-in voting. In fact, Texas is the only battleground state overall that won’t have no excuse absentee voting or allow coronavirus as an excuse to cast a ballot by mail. 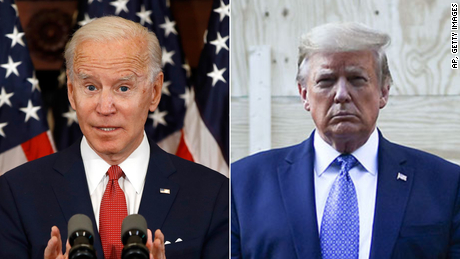 Trump continues to lose ground in 2020 election as nation grapples with coronavirus
View Trump and Biden head-to-head polling
Read More
This year, we should expect many more voters to cast an absentee ballot than normal. As I noted last week, CNN/SSRS polls from Arizona, Florida and Michigan showed that between 41% (Florida) and 61% (Arizona) of voters said they vote via absentee or mail ballots.
A Fox News poll from May found that 35% of voters said they’d prefer to vote via absentee or mail compared to 19% who said they normally do. The jump comes as the percentage who said they would vote in-person on Election Day dropped from 65% to just 48%. A similar 38% of voters told ABC News/Washington Post pollsters in July that they preferred to vote by mail. All told, we’re looking at about at least half of voters who say they prefer to be voting either by mail or early in-person.
Across these polls, Democrats are far more likely than Republicans to say they will be voting via the mail or absentee. That means a lot of Trump’s base will be waiting until November 3 to cast their ballot.
What’s more interesting is those voters who are potentially persuadable. it would be one thing if the early or mail voters were people who were in the bag for one candidate or another.
Instead, it looks like a good chunk of potentially persuadable voters will be casting their ballot earlier in the process. This means that a lot of the voters that campaigns may be targeting will need to be reached well before the official Election Day.
Visit CNN’s Election Center for full coverage of the 2020 race
When you average across our CNN/SSRS polls in Arizona, Florida and Michigan, 49% of voters who chose neither Biden nor Trump in the horserace said they will vote via absentee or mail. That’s basically the same as the 50% average of all voters across the three states. When you combine that mail vote with those who said they would vote early in-person, a clear majority of voters of non-Biden/non-Trump voters say they’ll be voting either via mail or early in-person.
The Fox News poll from earlier this year suggests the same phenomenon. A plurality (48%) of pure independents (i.e. those who don’t lean towards either party) said they would like to vote either via absentee or mail (36%) or early in-person (12%). Only 43% said they would be waiting until Election Day to vote in-person, which is considerably down from the 61% who say they normally do.
To the Trump campaign’s credit, they seem to recognize the importance of reaching voters early. They claim they’ve staggered their new advertising buys to match the states where early voting is most significant.
Whether those ads work is another question. What is clear given the state of the race is that Trump must hope that those ads do something or some other factor turns the race in a different direction sooner rather than later, given the high number of people who won’t be waiting until November 3 to cast their ballots.