“I’ve come here today because I, like so many Americans, owe a great debt to John Lewis and his forceful vision of freedom,” Barack Obama, the country’s first Black president, said in a striking eulogy at Atlanta’s Ebenezer Baptist Church, which has long been a haven for the Black freedom struggle.
Below are some highlights from the ceremony, which captured the deep resonance the congressman had for so many.

‘From Freedom Summer to Selma’ 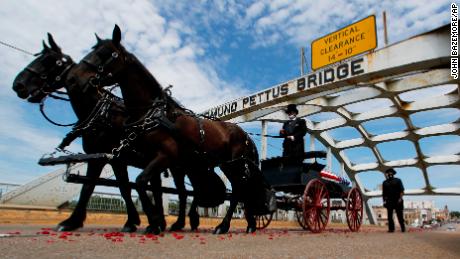 Former President George W. Bush grounded Lewis’ legacy in history, recalling moments from the epic 1960s civil rights movement, in which Lewis was a central force.
Read More
“From Troy to the sit-ins of Nashville, from the Freedom Rides to the March on Washington, from Freedom Summer to Selma, John Lewis always looked outward, not inward,” Bush said.
That one sentence neatly distilled some of the work that Lewis risked his life for. Famously, he was a key organizer of the 1965 voting rights marches from Selma to Montgomery, Alabama. During a march across the Edmund Pettus Bridge in Selma, a state trooper viciously beat Lewis and fractured his skull. The event became known as Bloody Sunday.
“I thought I was going to die on that bridge,” Lewis says in “Good Trouble,” a new CNN Films documentary.
These marches were crucial elements of the fight to secure the passage of the Voting Rights Act of 1965, a watershed piece of federal legislation that protects against racial discrimination in voting. 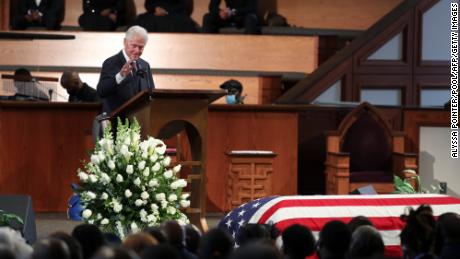 But it wasn’t just what Lewis did that was so remarkable — it was also how he did it.
“We honor our friend for his faith and for living his faith. Which the Scripture says is the substance of things hoped for, the evidence of things unseen,” former President Bill Clinton said. “John Lewis was a walking rebuke to people who thought: ‘Well, we ain’t there yet and we have been working a long time. Isn’t it time to bag it?’ He kept moving. He hoped for and imagined and lived and worked and moved for his beloved community.”
Kept moving. Hoped. Imagined. Lewis was intimately familiar with injustice: its blows, its betrayals. But he never pulled away from his faith, his central tenet of nonviolence or his belief in equality.
“In my life I have done all I can to demonstrate that the way of peace, the way of love and nonviolence is the more excellent way,” Lewis wrote in a New York Times essay published on Thursday.
Notably, Clinton faced rebuke for some of his comments.
“There were two or three years there where the movement went a little too far toward Stokely, but in the end John Lewis prevailed,” Clinton said.
He was referring to Stokely Carmichael (later Kwame Ture), who in 1966 succeeded Lewis as the chairman of the Student Nonviolent Coordinating Committee and who eventually developed the Black Power movement, which took a more militant approach to activism.
Clinton’s remarks, which slammed one Black freedom fighter in an attempt to elevate another, struck an understandably sour note.

‘Lillian needed a good man, not just the bums who were approaching her’ 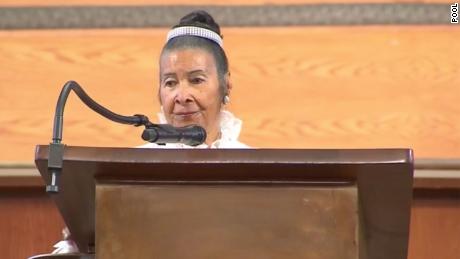 Civil rights leader Xernona Clayton brought humor to the service by sharing the personal story of how she had introduced Lewis to his late wife, Lillian.
Clayton said that she admired John’s fervor and tenacity and knew that Lillian was single, “so I decided that Lillian needed a good man, not just the bums who were approaching her.”
“She was highly intellectual, well-traveled, well-educated. And I wanted her to have someone who really would appreciate her skills and her talent. So I looked around and decided that I liked John,” Clayton said.
She recalled that Lillian wasn’t interested in John at first, but Clayton persisted. She arranged a New Year’s Eve dinner party that Lillian and John both expected to be a big bash — but it was only the three of them. The relationship blossomed into love, and Lillian and John were married in 1968.
“But Lillian and John stayed married. I put it together, but it lasted 43 years. That’s not a bad record, is it? They were happy, and Lillian gave him every support a wife could ever give a partner,” Clayton said.

‘He’s just as you may imagine, but better’ 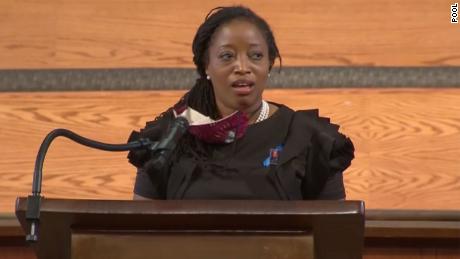 Jamila Thompson, Lewis’ deputy chief of staff, spoke of the late congressman as a “gentleman” and “peaceful soul” who treated each of his staffers with respect.
“People always ask us: ‘What was it like to work for Congressman Lewis? What was he like up close? What was he like in real life?’ And it is too difficult to explain, so my answer was always the same: ‘He’s just as you may imagine, but better,’ ” said Thompson, who spoke on behalf of Lewis’ staff at the service.
She added: “So many workers are often taught to be invisible, but with Mr. Lewis, he always saw you and made you feel special and worthy.”
Thompson remembered how Lewis provided lunch so often that office members joked about how much weight they had gained and how he always wanted his staff to share a meal — breaking down work barriers.
“We were a little family, a little enclave. A lot of drama, a lot of fun and so much love,” she said.
Thompson also spoke of how hard Lewis worked for his constituents and tested his staff to see if they were informed, saying that he had taken “immense pride” in representing Georgia’s 5th Congressional District.
“The constituents were a compass, and Congressman Lewis worked around the clock to find solutions to their challenges,” she said.

‘In the pulpit of its greatest pastor’ 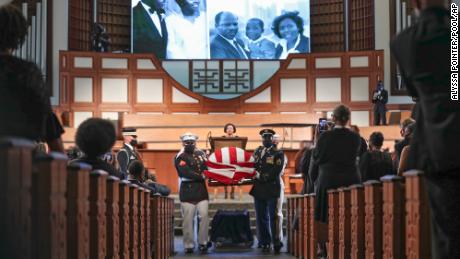 The choice of location mattered, too.
“It is a great honor to be back in Ebenezer Baptist Church, in the pulpit of its greatest pastor, Dr. Martin Luther King Jr., to pay my respects to perhaps his finest disciple — an American whose faith was tested again and again to produce a man of pure joy and unbreakable perseverance — John Robert Lewis,” Obama said.
King was co-pastor of Ebenezer from 1960 until his assassination in 1968. In the decades since, the 134-year-old church has become something of a locus of the civil rights movement.
The funerals of Hosea Williams, an organizer who along with Lewis led some 600 marchers across the Edmund Pettus Bridge on Bloody Sunday, and Rayshard Brooks, a 27-year-old Black man who in June was fatally shot by Atlanta police, were held at Ebenezer.
In addition, Ebenzer served as a gathering place in the wake of the shootings at the Emanuel African Methodist Episcopal Church in Charleston, South Carolina, and the gay nightclub Pulse in Orlando.
“Ebenezer is a place that people turn to in these moments of crisis in this city and the nation,” Ebenezer senior pastor Raphael G. Warnock told The Atlanta Journal-Constitution. “People saw it as a place where they could bring their pain, and families saw it as a sanctuary for them in a time of need. And John Lewis is an important part of this story.”

‘Bull Connor may be gone’

In his eulogy for Lewis, Obama went beyond pure remembrance of the congressman.
He drew parallels between Lewis’ fight for civil rights — the opposition he faced — and the present-day protests over the deaths of Black Americans at police officers’ hands, declaring that Lewis’ struggle for racial equality, which he had devoted his life to, isn’t over.
“Bull Connor may be gone. But today we witness with our own eyes police officers kneeling on the necks of Black Americans. George Wallace may be gone. But we can witness our federal government sending agents to use tear gas and batons against peaceful demonstrators,” Obama said, naming two segregationists and nodding to Trump administration-sanctioned assaults on protesters in Washington and in Portland, Oregon.
The former president also warned of attacks against democracy and efforts to disenfranchise Americans.
“We may no longer have to guess the number of jellybeans in a jar in order to cast a ballot. But even as we sit here, there are those in power doing their darnedest to discourage people from voting — by closing polling locations, and targeting minorities and students with restrictive ID laws, and attacking our voting rights with surgical precision, even undermining the Postal Service in the run-up to an election that is going to be dependent on mail-in ballots so people don’t get sick,” he said.
Obama celebrated Lewis not as a static hero — but as a peerless activist whose work must be protected.