The explosion in Beirut

Trump began the briefing by offering sympathies to Lebanon for the massive explosion in Beirut that has killed at least dozens of people and wounded thousands more.
Then, appearing to depart from his prepared text, the President said, “It looks like a terrible attack.”
When he was asked later in the briefing if he was confident the incident was an “attack,” he said, “Well it would seem like it based on the explosion. I met with some of our great generals and they just seemed to feel that it was. This was not, a — some kind of a manufacturing explosion type of event. This was a — seems to be, according to them — they would know better than I would — but they seem to think it was an attack, it was a bomb of some kind.”
Read More
Facts First: While Trump has access to classified intelligence that we do not, there was no public evidence at the time he spoke that the explosion was an “attack” or a “bomb,” and the US military had not publicly said anything of the sort. At the time of the briefing, Lebanon’s government had also not alleged an attack or a bomb.
In a statement that did not allege that the explosion was caused by an intentional act, Prime Minister Hassan Diab said that a massive quantity of ammonium nitrate had been left in a warehouse for years without adequate safety measures. An early report from a Lebanese state news agency raised the possibility of a major warehouse fire before the explosion.
Initial conclusions on such incidents should be treated with caution, and we aren’t declaring Trump’s claim false; it’s possible he will be proven right. But given his history of fabricating and exaggerating supposed private conversations, it’s certainly worth waiting for corroborating evidence.
On Tuesday evening, a Pentagon spokesman referred CNN to the White House on the matter. Three Defense Department officials, who requested anonymity so they could speak freely, told CNN that as of Tuesday night there was no indication that the incident was an “attack.” 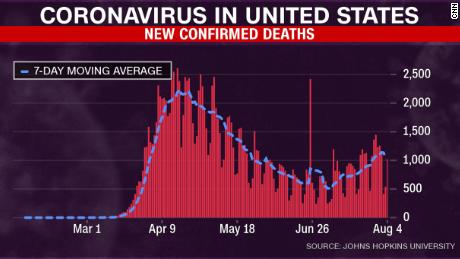 Trump said, “Thanks to substantial improvements in treatment and the knowledge we have gained about the disease itself, the recent rise in cases has not been accompanied by a significant increase in deaths.”
Facts First: “Significant” is a vague word, but there was a major July spike in the number of US coronavirus deaths — which followed, as per the usual pattern, the recent spike in cases that began in mid-June. The number of confirmed deaths per day in the US roughly doubled between early July and early August, from about 544 deaths per day as of July 3 to about 1,056 new deaths per day as of August 3, according to Johns Hopkins University data.
The number of deaths per day is still much lower than it was in April, when it sometimes exceeded 2,000 deaths per day. But that doesn’t mean the July spike is not significant.
Trump could alternatively have noted that the US mortality rate — the number of deaths versus the number of cases — did decline even as the number of deaths rose, from about 4.6% on July 3 to about 3.3% on August 3, according to Johns Hopkins. But that’s not what he said here.

After a reporter pushed the President on his claims about the US coronavirus mortality rate, Trump claimed that “we’re at the bottom of the list.” He later implied that New York’s status early in the pandemic as a coronavirus hotspot was responsible for a large portion of the US deaths and cases, suggesting that by excluding those numbers, the US numbers are “among the lowest.”
Facts First: Both with and without New York, the United States is not “at the bottom of the list” nor does it have among the lowest mortality rate by either of the two most common measures.
Regardless, it’s misleading for the President to cherry pick combinations of data and omit one state in an attempt to support the narrative that his administration has done a good job responding to the virus. Additionally, the surge of cases in New York happened at the start of the pandemic, so while it’s possible that contributed to higher numbers early on, the virus is now causing spikes in cases and deaths at or above New York’s initial level in other states. While the US coronavirus mortality rate is lower with New York excluded, it remains relatively high when adjusted for population and compared to other countries.
Currently, the US mortality rate is at 47.5 deaths per 100,000 people, among the five highest based on the Johns Hopkins University rankings. Without New York, the US has 39.7 deaths per 100,000 people. As of Tuesday evening, at least 15 of the most affected 20 countries have lower mortality rates than that, according to data from Johns Hopkins. Not to mention dozens of other, smaller countries with lower mortality rates not on the Johns Hopkins list.
Based on the case fatality rate, meaning the number of cases that result in deaths, which is the measure Trump has previously referenced, the US rate of 3.3% is in the bottom half among the 20 countries most impacted by coronavirus, according to Johns Hopkins. However, even with New York’s cases and deaths removed, five of the top 20 countries still have case fatality rates lower than the United States’ 2.67%.

Referring to a New York state Democratic congressional primary that remains uncalled nearly six weeks after the June 23 election day, Trump again implied something nefarious happened, saying, “They don’t know what happened to them, is there fraud, is there — it’s a disaster.”
Facts First: The election results have been slow because the state has had administrative problems — ranging from insufficient staffing to outdated technology — in trying to count a much larger than usual number of absentee votes. There has been no evidence to date of fraudulent voting in the New York primaries, much less the kind of widespread voter fraud Trump has wrongly insisted is a common feature of mail-in voting.
The two candidates and many others have expressed concern about how many absentee ballots may be rejected in the New York races. But rejections occur for all sorts of reasons other than fraud, such as a voter forgetting to include their signature or mailing their ballot too late.

Boasting of how many coronavirus tests the US has conducted, Trump claimed, as he did repeatedly in late July, that India has conducted about “11 million” tests compared to 61 million for the US.
Facts First: This is false. India has conducted more than 20 million tests; the country passed the 20 million mark on Sunday, the Hindustan Times reported on Tuesday.
India has more than four times the population of the US, so the US has no doubt conducted far more tests both in absolute numbers and per capita, but Trump’s figure for India is simply incorrect.