In more than two dozen interviews with CNN in recent days, members of Congress, top Democratic donors, Biden allies and others close to the vice presidential vetting process said California Rep. Karen Bass, the 66-year-old chair of the Congressional Black Caucus, has gained real traction in the late stage of the search. Amid furious last-minute lobbying and speculation about Biden’s historic decision, California Sen. Kamala Harris and Susan Rice, Barack Obama’s former national security adviser, are also believed to be among the most serious contenders.
The search continues to be conducted under extreme secrecy, with even many top campaign advisers in the dark about the vetting process. Several additional women have also gone through extensive examination by the Biden team, including Massachusetts Sen. Elizabeth Warren, Florida Rep. Val Demings and Illinois Sen. Tammy Duckworth. Others, including Atlanta Mayor Keisha Lance Bottoms, Michigan Gov. Gretchen Whitmer and New Mexico Gov. Michelle Lujan Grisham have also received various levels of scrutiny by the vetting team.
Biden’s team has yet to tell any of the women they’ve considered in earnest for the vice presidential role that they are officially out of the running, people familiar with the process said, with one source saying 11 women are still formally being considered. 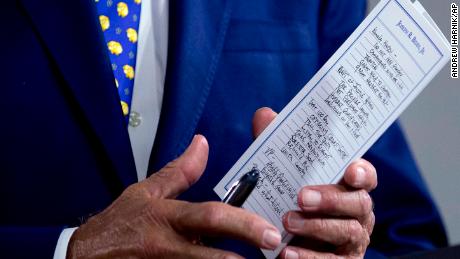 CNN’s Arlette Saenz and Annie Grayer contributed to this report.