A panel of judges on the 9th US Circuit Court of Appeals ruled earlier this year that the NCAA violated federal antitrust law when barring some expenditures. The ruling is set to go into effect on August 11.
The case is the latest dispute between those who believe that schools should be able to decide for themselves how to compensate their athletes against the NCAA, which says such efforts could blur the line between college and professional sports.
In 2016, the Supreme Court let stand an opinion that said the NCAA could not limit schools from giving scholarship funds including costs of attendance at schools.
The latest challenge concerns whether schools can give money to athletes for computers, study abroad scholarships, paid internships, musical instruments and other products and services related to academic pursuits.
Read More
A class of college football players and Division I basketball players brought the challenge.
“The athletes have been waiting years to the reap the benefits of competition, and we are hopeful that the Supreme Court will let the injunction take effect so they can experience this now,” said the players’ lawyer Jeffrey L. Kessler.
But the NCAA says its rules are necessary to maintain the tradition of amateurism in college sports. It plans to ask the Supreme Court to take up the case next term worrying that it will be difficult for the courts to limit the schools’ spending.
“Each year, nearly half a million student-athletes play two dozen sports on nearly 20,000 teams at about 1,100 NCAA member schools and 100 member conferences in three divisions across the country,” lawyer Seth Waxman argued in court papers. 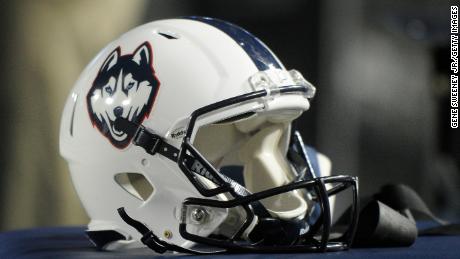 UConn becomes first school in college football’s top division to cancel 2020 season
Waxman said that while the principle of amateurism does not permit college athletes to be paid for their athletic play, it has long permitted them to receive “reasonable and necessary academic or athletic-related expenses (tuition, books, uniforms, athletic travel, etc.), i.e., the expenses they incur in order to be student- athletes.”
But he said other funds could develop into a slippery slope akin to compensation.
In court papers Waxman said the lower court opinion will “turn student-athletes into professionals rather than preserving their status as amateurs, eradicating the procompetitive differentiation that this Court and others have recognized as the hallmark of NCAA sports.”