But Harris, who attracted national attention as a fierce participant in Senate proceedings, doesn’t plan to ask questions during Friday’s virtual hearing.
The former California prosecutor will instead submit a “lengthy list of questions” in writing to Postmaster General Louis DeJoy, an aide told CNN.
Harris’ decision not to verbally participate in the hearing appears to be a sign of her new role as Democratic presidential nominee Joe Biden’s running mate, a position often seen as one where it’s most important to “do no harm” to the top of the ticket. It also could be an indicator of how the Biden camp plans to deploy Harris in the homestretch of a campaign where Biden’s team has worked to make a referendum on President Donald Trump.
The testimony is also scheduled the morning after Harris’ running mate gives the biggest speech of his career to date, a time historically reserved for cable networks to reflect on the nominee’s speech — and not testimony involving the vice presidential nominee.
Read More
Harris is one of six Democrats on the Senate Homeland Security and Governmental Affairs Committee, where DeJoy is testifying for the first time amid an uproar over cuts to USPS service that Democrats warn threaten the ability for mail-in ballots to be delivered in a timely fashion. 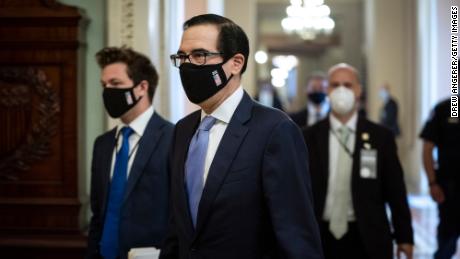 Former Postal Service board member says Mnuchin sought to make Postal Service a ‘political tool’
Harris made a name for herself in the Senate as a tough interrogator at hearings, pressing everyone from Attorney General William Barr to then-Supreme Court nominee Brett Kavanaugh. When Trump attacked Harris last week as “extraordinarily nasty,” he was referencing her exchanges with Kavanaugh.
In her acceptance speech Wednesday, Harris opted to focus in great detail on her personal upbringing and the symbolism of the moment. She reintroduced America to who she is, where she came from, how that shaped her worldview and the vision that she and Biden are offering if they are elected.
She hit Trump over his handling of the pandemic and creating racial division, at one point declaring “there is no vaccine for racism.” But the amount of attacks paled in comparison to both the Democrats who spoke before her as well as her history of attacks against the President during her primary campaign. The speech served to emphasize her role as a history maker and pioneer and muffled her role as an attacker.
“You want to have people continue to see her in the environment that they’re used to. But they also want her to be seen not just as the senator of California and instead the vice president of the United States,” a source familiar with Harris told CNN.

A Harris campaign aide said the VP nominee plans to be in Wilmington, Delaware, on Friday. Harris will do her first on-camera joint network interview with Biden with ABC’s David Muir and a separate conversation with “Good Morning America’s” Robin Roberts, airing in part on Friday and Sunday.
Details of Harris’ schedule for the Republican National Convention week are still being finalized, but the aide added, “you can expect that she’ll be visible to counter-program the RNC.”
Since Harris’ selection last week, the California senator has done a majority of her interviews with Black women reporters in outlets geared toward women or people of color audiences like Essence, The 19th and TheGrio.
The aide says post-DNC convention, Harris will appear before a “variety of important audiences,” including battleground states, suburban women and other key constituencies for the party.
Friday’s Senate hearing is entirely virtual, in what will be DeJoy’s first congressional appearance since being appointed postmaster general in June amid an uproar over Postal Service reductions. The hearing is preempting DeJoy’s scheduled testimony on Monday before the Democratic-led House Oversight Committee. Senate Homeland Chairman Ron Johnson said in a statement earlier this week the hearing was a chance for DeJoy to explain the Postal Service’s fiscal issues before going before a hostile House committee determined to conduct a show trial.”

Harris known for her tough questioning

During her presidential run last year, supporters asked how they first heard of Harris often cited her grillings of Kavanaugh, Barr and former Attorney General Jeff Sessions in Senate committee rooms.
“I watched the Barr confirmation, the Kavanaugh confirmation. You can tell she’s a prosecutor. She’s methodical. If you sit back and just kind of listen, really listen, you can tell she’s two steps ahead of them in her questioning,” Patrick Mirocha, a plant operator at a waste treatment plant, said in an interview with CNN in August 2019. 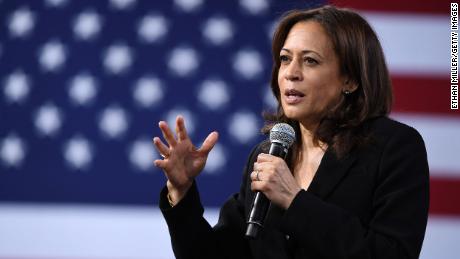 Kamala Harris’ balancing act
Harris participated in multiple high-profile hearings as a member of both the Intelligence and Judiciary committees, from former FBI Director James Comey’s 2017 testimony to the Kavanaugh hearings. Her sharp questioning was interrupted on multiple occasions by her Republican male colleagues during Intelligence Committee hearings in June 2017.
When Sessions was testifying, he protested when Harris demanded he explain why he wouldn’t answer questions: “I’m not able to be rushed this fast. It makes me nervous,” Sessions said.
During the Kavanaugh hearings, Harris tangled with the Supreme Court nominee on several occasions.
“Can you think of any laws that give government the power to make decisions about the male body?” Harris asked Kavanaugh.
“I’m happy to answer a more specific question,” he responded.
“Male versus female,” Harris pressed, “that the government has the power to make a decision about a man’s body?”
“I’m not thinking of any right now, senator,” Kavanaugh eventually said.
Harris’ talents as a prosecutor were on full display at times during her primary campaign, too. She often assailed Trump as a predator, saying he has a long and extensive “rap sheet,” and how she was someone who could prosecute the case against him.
But her most famous attack line during the primary was used against Biden, now her running mate, over the issue of busing to desegregate schools.
“I do not believe you are a racist and I agree with you when you commit yourself to the importance of finding common ground,” Harris said on stage to Biden in a June 2019 Democratic debate. She then took him to task over his comments about his working with segregationists and past positions on busing.
Critics of her possible selection to be Biden’s Vice President used the attack against her during his search, along with her ambition, compromised her trustworthiness — a claim her supporters called sexist.