The move puts the California Democrat squarely in the middle of a closely-watched fight and could deliver a boost to Kennedy ahead of the September 1 primary election where he is challenging Markey, who served alongside Pelosi for decades as a member of the House of Representatives.
“Never before have the times demanded we elect courageous leaders as today. That is why I’m proud to endorse Joe Kennedy for Senate,” Pelosi said in an endorsement video released by the Kennedy campaign on Thursday.
“Massachusetts and America need Joe Kennedy’s courage and leadership in the Senate to fight for the change we need,” Pelosi said.
A Kennedy has never lost Massachusetts. But Markey, 74, has countered the shine of the Kennedy name by projecting the power of some of the party’s stars, including Sen. Elizabeth Warren of Massachusetts and Rep. Alexandria Ocasio-Cortez of New York, who have fundraised for the senator. Progressives, who have spent the last five years on the attack, trying to win seats from moderate incumbents in the House, have put their full weight behind Markey’s campaign, and view the defense of his seat as one of their most important fights of the cycle.
Read More
Markey supporters say he deserves another six-year term based on his voting record and point to his co-authorship of the Green New Deal and earlier support of “Medicare for All,” pointing to both as signs that he is of the times.
Kennedy, meanwhile, has maintained that he would be a different kind of senator, who will travel across the country and the state to elect Democrats, as he did in 2018 to help the party retake the House.
A Pelosi aide told CNN that Kennedy did not ask for the endorsement, but that the speaker felt compelled as a result of the congressman’s work during the 2018 election cycle that played a key role in Democrats’ efforts to take back the House.
The aide said that Pelosi was also concerned over attacks from the Markey campaign, including on the Kennedy family legacy. Markey says, for example, in a recent ad, “With all due respect, it’s time to start asking what your country can do for you,” taking on the famous line from President John F. Kennedy in which he said, “Ask not what your country can do for you — ask what you can do for your country.” 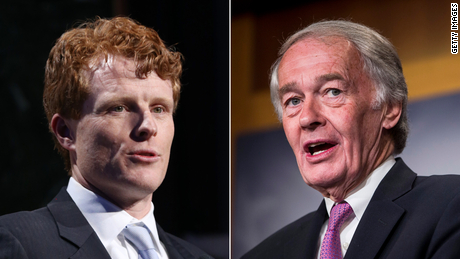 Massachusetts’ Ed Markey tries to defend his seat from a Kennedy
Progressives — including Ocasio-Cortez — reacted to the news of the endorsement with frustration. Party leadership has been aggressive in seeking to defend its incumbents against primary challengers, but Pelosi’s endorsement, they argued, came in defiance of the spirit of that rule.
“No one gets to complain about primary challenges again,” Ocasio-Cortez tweeted, punctuating the sentence with a happy emoji, before addressing the House Democratic campaign arm.
“When can we expect you to reverse your blacklist policy against primary orgs?,” she asked. “Because between this & lack of care around @IlhanMN’s challenger, it seems like less a policy and more a cherry-picking activity.”
The “blacklist” refers to a rule instituted by the Democratic Congressional Campaign Committee that prohibits party consultants from working for primary challengers. Those who do risk being banned from receiving contracts with other DCCC-aligned campaigns, a fact other progressives cited in calling out Pelosi’s endorsement Thursday. The policy does not apply to Senate campaigns.
“When progressives challenge Democrats who vote with Trump 2/3rds of the time, Nancy Pelosi cries foul and works with the (Democratic Congressional Campaign Committee) to make a blacklist for anyone helping the challenger. But when she likes the challenger, or the challenger has a rich and wealthy family, it’s okay?” Sunrise Movement executive director Varshini Prakash, whose group is one of Markey’s leading supporters, said in a statement. “It’s never been about protecting incumbents, it’s been about protecting big Democratic donors profiting off the status quo. “
Justice Democrats, the group that has drawn Pelosi’s ire for launching and supporting progressive primary campaigns against members of her caucus, accused the Speaker of hypocrisy and “using her power to undermine the next generation of Democratic voters and the progressive champions we choose to believe in.”
“For two years, Democratic Party leadership has endorsed incumbents over progressive primary challengers claiming it is their policy to always back incumbents — even when the incumbent was anti-choice and endorsed by the NRA,” Justice Democrats executive director Alexandra Rojas said. “But now, when a sitting US Senator champions the Green New Deal while wildfires blanket Speaker Pelosi’s home state in smoke, she chooses to endorse a challenger.”
This story has been updated with additional developments Thursday.