Asked if she has an idea on the price tag she’s willing to settle for, Pelosi told CNN bluntly: “Yeah, $3.4 trillion.”
That price tag has been rejected by Senate Majority Leader Mitch McConnell, who last week put forward the Senate GOP plan that would cost roughly $1 trillion and has attacked House Democrats’ $3 trillion-plus bill that passed their chamber more than two months ago. And even some centrist House and Senate Democrats are squeamish about backing such an eye-popping price tag proposed by the speaker.
Pelosi, Senate Minority Leader Chuck Schumer, Treasury Secretary Steven Mnuchin and White House chief of staff Mark Meadows have already met six times behind closed doors — and are not near an agreement on range of issues, including expiring jobless benefits and extending the expired federal eviction moratorium, according to both sides. At the seventh meeting on Tuesday, which lasted about an hour-and-a-half, the two sides agreed to see if they can cut a deal by the end of the week — as the Trump administration proposed extending the eviction moratorium until year’s end.
Schumer and Pelosi said that the Democrats made “concessions” at the meeting, as did the Trump administration, but Meadows emerged later to say that the Democratic concessions were “minor” and both sides acknowledged far more work needed to be done.
Read More
And there is a sharp disagreement about the scope of any deal, as the administration strongly rejected Pelosi’s price tag.
“We’re not going anything close to $3.4 trillion,” Mnuchin said after briefing McConnell after his meeting with the Democratic leaders. “That’s just ridiculous.”
But Pelosi, when asked if it’s really feasible to get a deal this week given how far apart the two sides are, said Tuesday: “At some point you just have to freeze the design.”
Pelosi’s comments come as anxiety is growing in the Senate GOP conference that the administration might sign onto a deal that lacks the support of many Senate Republicans. While McConnell is getting briefed regularly on the talks, he has chosen not to join the closed-door discussions, saying President Donald Trump is the only person who can sign legislation into law so the White House should take the lead.
“I always want to be able to have a senator in the room and negotiations,” Sen. James Lankford, an Oklahoma Republican, said when asked about McConnell not participating in the closed-door talks.
“I always do,” Lankford said when asked if he thinks it would be better if McConnell should sit down with Democrats. “We have a House, a Senate and White House — we have three institutions. If we have got just a White House and a House negotiating, we are leaving out the Senate … and I think we have something to say.”
And GOP senators, particularly ones facing reelection, are uneasy about returning home to voters and begin next week’s August recess if no deal is reached by then.
“Yes,” GOP Sen. Lindsey Graham, who is facing reelection in South Carolina, said when asked if the August recess starting next should be canceled if there isn’t a deal done. “I agree with that.” 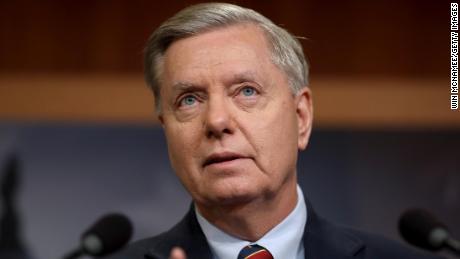 Former Lindsey Graham donor backs his Democratic challenger after questioning Graham’s principles
Sen. Susan Collins, a Maine Republican facing a difficult reelection in the fall, said: “If we can’t get this done in the midst of a persistent pandemic, then we have failed the American people. And I’m optimistic that we will be able to get it done.”
Yet it’s still very uncertain a deal can be reached.
Pelosi said that she hopes they can have a bipartisan agreement this week so there are votes in the House by next week, given that they will vote to hold a Rules Committee meeting to consider the parameters for the House floor debate and there would need to be time to hammer out the legislative language and get cost estimates.
Pelosi said that currently both sides are still talking to the other about how much money is needed for various programs that each side has proposed — a sign that there is far more that needs to be done before the two sides get anywhere close to a deal.
“We are just right now identifying the justification for what we’re saying it costs — how the money would be spent,” Pelosi said. “And we’re asking the same for some of the things they are talking about, so that we have a clear understanding. So it’s productive in that regard. And now we just have to negotiate what comes next.”
Pelosi added: “You have to show how you would spend it, in addition to establishing the need, have it work, and why that much money, and once we come to an amount, and I think we’ll come to an agreement.”
However, the price tag Pelosi is pushing has even some Democrats recoiling.
“That’s pretty healthy,” said Sen. Joe Manchin, a conservative Democrat from West Virginia, when asked about Pelosi’s call for a $3.4 trillion package. “I want to be fiscally responsible. …That might be a little bit more than we have an appetite for.”
This story has been updated with additional developments Tuesday.

CNN’s Ian Sloan and Dominic Torres contributed to this report.