Their Democratic counterparts, meanwhile, suffered another bruising defeat by a progressive insurgent.
Conservative firebrand Kris Kobach and indicted Rep. Steve Watkins lost their primary bids in Kansas, perhaps providing the party its best chances to keep the Senate and House seats in party control. And in Michigan, Peter Meijer won the Republican primary for the race to succeed the retiring Rep. Justin Amash, who left the Republican party after criticizing Trump and his former GOP colleagues for failing to hold the President to account. Meijer, 32, won with the backing of House GOP Leader Kevin McCarthy and, if he wins, could turn the page from Amash, who bedeviled his party’s leaders.
Across the aisle, progressive Cori Bush defeated Missouri Rep. William Lacy Clay, whose family has held the seat for 50 years. Bush’s victory was historic — and unique. Unlike Rep. Alexandria Ocasio-Cortez and New York’s Jamaal Bowman, who unseated Rep. Eliot Engel in June, Bush, who is Black, defeated a Black incumbent whose ties to the district were unquestioned, but whose more moderate politics appeared to fall out of favor in the midst of a generational upheaval spurred by police violence and the coronavirus pandemic.

GOP establishment gets its man in Senate race

Read More
The Senate Republican primary was a huge headache for the party establishment. Secretary of State Mike Pompeo passed on running, despite the wishes of Senate Majority Leader Mitch McConnell, leaving behind an unruly, 11-person field of wannabes. Top Republicans became terrified that former Kansas Secretary of State Kris Kobach would win the nomination and put both the seat and the Senate at risk. Then Democrats launched a multi-million dollar effort to boost him.
But Rep. Roger Marshall won on Tuesday, relieving the establishment of its worst fears.
“We are now a team, all focused on keeping the US Senate in Republican hands,” said Marshall in a statement.
Democrats haven’t won a Senate seat in Kansas since 1932, the longest losing streak for the party in the country. But the GOP establishment said that spell would be broken if Kansas picked Kobach.
So it began an effort to defeat him. The National Republican Senatorial Committee opposed Kobach. The Senate Leadership Fund, a Super PAC aligned with McConnell, spent over $1.8 million supporting Marshall, a OB-GYN doctor, airing ads touting his work for military veterans. Republican Sen. Pat Roberts, whose retirement after nearly 40 years in Congress set up the open seat, got off the sidelines and endorsed Marshall. So did former Kansas Sen. Bob Dole. Powerful groups like the Kansas Farm Bureau, Kansans for Life and the Chamber of Commerce also backed Marshall.
But Marshall did not have the endorsement of the man who could potentially ensure his victory: Trump. Last week, The President indicated to associates on Air Force One that he would not publicly intervene in the race to the frustration of Marshall’s supporters. On Tuesday night, Trump called Marshall, who held the phone up to a microphone for them to hear.
“I want to congratulate everybody,” said Trump. “Roger, that’s an incredible race.” 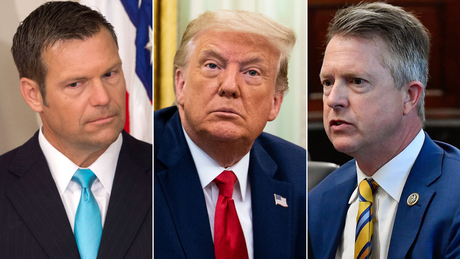 Rep. Steve Watkins, a first-term Republican representing eastern Kansas, lost his primary to Kansas state Treasurer Jake LaTurner, after being charged with three felonies related to voter fraud.
The charges included providing false information, voting without being qualified and unlawful advance voting, as well as a misdemeanor charge of failing to notify the DMV of change of address. Watkins used a UPS store as his registration address for a 2019 municipal election in order to conceal the fact that he was then living with his parents, according to the Kansas City Star. 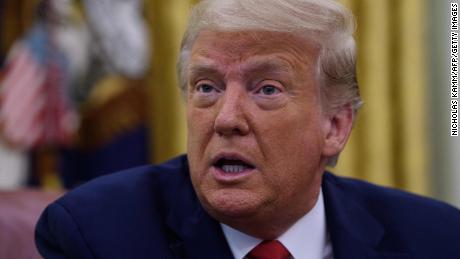 Here’s proof that Trumpism is forever for Republicans
Watkins said that the charges from the Shawnee County District Attorney’s office are “hyper-political” and “very suspicious,” asserting that he’s “done nothing wrong” and would set “the record straight.” He temporarily stepped down from his assignments on the House Foreign Affairs, Veterans’ Affairs and Education and Labor committees. Afterward, House GOP Leader Kevin McCarthy vouched for the congressman and said that he still supports Watkins.
But LaTurner attacked Watkins over the charges and earned the endorsement of the Kansans for Life’s PAC and Kansas Republican Rep. Ron Estes in the aftermath.
“We need honest conservative leadership,” said LaTurner in one ad. “Someone who actually lives in Kansas, and lives our values.”
LaTurner also claimed that Watkins would lose in November to the Democratic nominee, Topeka Mayor Michelle De La Isla. In 2018, Watkins won his race by less than a point even though Trump won the district by 19 points in 2016. In that campaign, Watkins ran as a political outsider and an Army veteran, but endured questions about his record, including over his role as a defense contractor in the Middle East, according to the Kansas City Star.

Another progressive upset in the House

Cori Bush, a progressive activist and veteran of the racial justice protest movement, defeated 20-year incumbent Missouri Rep. William Lacy Clay in a Democratic primary on Tuesday, a stunning victory for the party’s insurgent left.
The US House seat, based in St. Louis, has been held by Clay and his father, former Rep. William Clay Sr., one of the founders of the Congressional Black Caucus, since 1969. Bush, who challenged Clay in 2018 and lost, was the first candidate launched by Justice Democrats, the progressive group dedicated to toppling moderate Democratic congressional incumbents.
“We’ve been called radicals, terrorists, we’ve been dismissed as an impossible fringe movement — that’s what they called us,” Bush said in her victory speech. “But now, we are a multiracial, multiethnic, multigenerational, mass movement united in demanding change, in demanding accountability, in demanding that our police, our government, our country recognize that Black lives do, indeed, matter.”
Bush’s second attempt to unseat Clay, who won in 2018 with 57% of the primary vote, was backed Vermont Sen. Bernie Sanders, the Sunrise Movement, a youth-led group that champions the Green New Deal, and other leftist and progressive leaders, including Jamaal Bowman, who ousted Rep. Eliot Engel in New York during the state’s June primary.
“Not me, US,” Bush tweeted overnight, after her win was confirmed, echoing Sanders’ campaign slogan in 2016 and 2020.

Peter Meijer, an Iraq War veteran and former NGO conflict analyst in Afghanistan whose family founded the Meijer grocery store chain, won the Republican primary race on Tuesday to replace Rep. Justin Amash. The Republican-turned Libertarian will retire this year after five terms in office representing a district anchored by Grand Rapids, Michigan.
Meijer defeated businesswoman and state Rep. Lynn Afendoulis and others with the support of McCarthy and the powerful DeVos family.
Afendoulis, backed by a number of state legislators and anti-abortion rights groups, attacked Meijer as a Never Trumper.
While Meijer has said he’s “not going to be a rubber stamp” of the President, he told a local ABC affiliate that they “align” on many issues, including “ending our wars overseas.”
Before Election Day, Jamie Roe, an adviser for Meijer’s campaign, told CNN that Afendoulis’ attacks were “ridiculous,” saying Afendoulis had social media posts in 2016 that were critical of the President. Roe said that Meijer’s opponents “have attacked him from day one” since he was the front runner. “They’ve all failed miserably to do it,” he added.
Meijer raised over $1 million and loaned himself $475,000, more than any other candidate in the race, according to the latest FEC filings.
Democrat Hillary Scholten, an immigration attorney who served in the Department of Justice during the Obama administration, has raised over $1 million. But it’ll be difficult for any Democrat to win the district that Trump won by nine points in 2016.
This story has been updated with additional developments Wednesday.