Antone Melton-Meaux, an attorney who runs a mediation practice and is a first-time candidate for elected office, raised a substantial amount of money in his bid to take on the congresswoman — more than $4.1 million as of July 22, according to Federal Election Commission data. Omar had raised around $4.3 million by the same date.
Melton-Meaux had argued that Omar is divisive and overly focused on building a national profile. Democratic Reps. Alexandria Ocasio-Cortez of New York and Rashida Tlaib of Michigan, who are also members of the “Squad,” faced similar attacks in primary races of their own.
But those attacks fell flat: Both Ocasio-Cortez and Tlaib also prevailed in fending off those challenges earlier this year.
With Omar overcoming her primary challenge, the freshmen group will not only dig a deeper foothold in the caucus, but, with victories by insurgent candidates Jamaal Bowman in New York, Cori Bush in Missouri and Marie Newman in Illinois, all of whom unseated incumbents this year, will also be poised to exert greater power next year.
Read More
During her relatively short time in office, Omar, who made history with Tlaib as the first Muslim women to serve in Congress, has attracted a devoted following on the political left for her outspoken support of progressive priorities.
At the same time, she has become a high-profile target of criticism, facing attacks from national Republicans, including President Donald Trump. In the summer of 2019, Trump tweeted that ” ‘Progressive’ Democrat Congresswomen” — a clear reference to “The Squad” — should “go back and help fix the totally broken and crime infested places from which they came.”
Congressional Democrats have rallied around Omar in the wake of the attacks from the President, but at times the congresswoman has also faced rebuke from members of her own party.
Early in her term, House Speaker Nancy Pelosi of California and other members of House Democratic leadership even went so far as to publicly call on Omar to apologize for comments they said included “anti-Semitic tropes.” 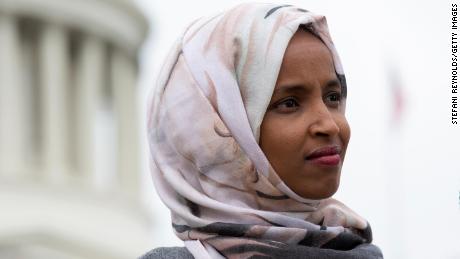 3 races to watch Tuesday in Minnesota and Georgia
That controversy may have helped propel Omar’s Democratic challenger. Of the money raised in support of Melton-Meaux’s bid, several hundred thousand dollars has been bundled by a pair of pro-Israel political action committees.
Omar apologized after a backlash from House Democratic leaders and has since sought to limit the damage and win over skeptics. Last May, she co-authored an op-ed with Rep. Jan Schakowsky of Illinois, who is Jewish, urging the Muslim and Jewish communities to “come together to confront the twin evils of anti-Semitic and Islamophobic violence.”
As she fought to keep her seat, Omar also has the support of Pelosi, who endorsed her bid for reelection. Sens. Bernie Sanders of Vermont and Elizabeth Warren of Massachusetts, along with other progressive leaders and organizations, led by Justice Democrats, have rallied for Omar ahead of the primary.
Melton-Meaux said in an interview that Omar’s past comments had created “a lack of trust” in the Jewish community that she had not adequately sought to repair. But his campaign has spent more time questioning Omar’s national profile and whether it has distracted her from the job.
“We don’t need another celebrity. We don’t need dividers. We need people that are going to work and unite us to challenge and take hold of these problems that we face as a community,” Melton-Meaux said after suggesting Omar had engaged “unnecessarily” in “Twitter fights” with Trump.
In a statement, Omar — who was attacked by the President again less than two weeks ago — hit back at Melton-Meaux’s suggestion that engaging publicly with Trump could be counterproductive.
“We are facing a president who explicitly targets me and other women of color regularly. When the President says me and other women of color should be ‘sent back’ to where we came from — that is language many immigrants and marginalized people have heard for decades to silence us and make us feel like we don’t have a voice,” Omar said. “Standing up to Donald Trump is not division. It is standing up for every community that has been targeted by a xenophobic and hate filled bully that happens to live in the White House.”
Omar, who lost her father this year to Covid-19, has across-the-board support from the state’s Democratic-Farmer-Labor Party, including her predecessor in the 5th District, Minnesota Attorney General Keith Ellison.
In 2018, Omar also received more votes in total than any new member of Congress and outperformed 428 congressional districts out of 435, according to an analysis from the congresswoman’s campaign team.
This story has been updated with additional developments Tuesday.