The move to enter Phase 2 of “Diplomacy Strong,” which allows up to 80% of employees to return to work onsite, drew swift opposition from the American Foreign Service Association and seemed to contradict the State Department’s own guidelines for bringing staff back into the office.
Some State Department officials have expressed concern about pressure to come back into the office to suit the Trump administration’s reopening agenda, with some senior officials reportedly calling a return to work “patriotic.”
A State Department spokesperson said the department moved the facilities in the National Capital Region to Phase 2 “(a)fter carefully assessing the local conditions and in close coordination with the Bureau of Medical Service.” 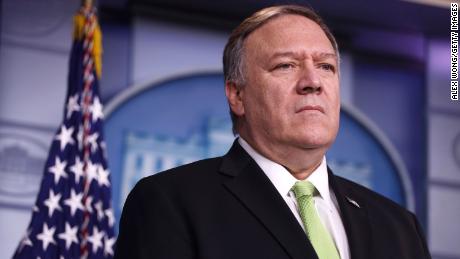 Pompeo covers for Trump claims ranging from Russian bounties to German troop withdrawal
“Employees who are in vulnerable populations are not required to return to the office. During this phase, telework flexibilities are still encouraged, given childcare, eldercare, and transportation concerns,” the spokesperson said. “All employees are to abide by social distancing guidelines and face covering mandates when at Department facilities.”
Read More
A senior State Department official told CNN prior to the move to Phase 2 that a return to work would be based on medical conditions, local conditions and operational conditions, including “a downward trend for at least 14 days.” Confirmed cases of coronavirus in DC, Maryland and Virginia have been on an upward trend for weeks.

‘We hope that the Department reconsiders this decision’

The American Foreign Service Association, which represents foreign service officers and specialists in the US and abroad, has urged Secretary of State Mike Pompeo to reconsider the move.
“While we share our members’ eagerness to get back to in-person work, AFSA believes that the criteria set out by the Department–data, conditions on the ground in specific locations, and employee safety–have not been met,” AFSA said in an email message shared with CNN.
“The criterion of a 14-day negative trend in new COVID-19 infections still does not exist in the Washington, D.C. metropolitan area and, in fact, five of the seven indicators on the Diplomacy Strong dashboard show clearly that the Washington metro area should not be moving to this next stage,” it said.
“We hope that the Department reconsiders this decision or, at the very least, ensures that there is no minimum percentage of employees which must report to work. Each bureau and office must be empowered to make decisions based on individual circumstances,” it said.
A spokesperson for the American Foreign Service Association said it has received “a significant number of member inquiries and expressions of concern.” 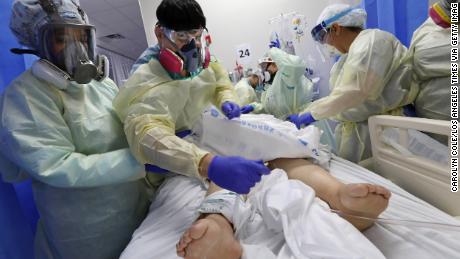 A variety of responses by US states hurt the country’s ability to contain the coronavirus pandemic, Fauci says
Some officials who spoke to CNN also expressed misgivings about a potential premature return to the office. One official said that just weeks ago they had been told they had been doing a great job working from home, but then “suddenly we are being told you need to get in here because they want to see faces.”
“They do not seem to be taking into account people with kids or elderly parents or people who themselves are not in the best health,” this official told CNN.
In certain meetings, senior State Department officials have said it is patriotic to come back to the office, although they acknowledged to staff that they do not have a good, in-depth answer as to why officials need to be back in the office.
“It has to do with certain officials wanting to get accolades from leadership. It is kissing up to the administration, it is the desire to get an ambassadorship, that kind of thing,” the official said of the pressure from certain department leaders to return to in-person work.
A senior US diplomat said that even if there isn’t a direct mandate from leaders to return to the office, the pressure could put officials in an uncomfortable bind.
“When your boss says, you know, ‘Gee, this is disappointing. I’d really hope that more people would take advantage of the opportunity to come back to work,’ you know, what does that mean for employees? That’s the kind of thing that I think there’s legitimate concern,” the diplomat said.

The situation at the State Department is made even more complex by transfers of diplomats between posts, including returning to Washington. The uncertainty around those transfers — and things like housing and schooling for children — adds a level of stress, diplomats said, that makes the pressure to get back to the office even more of a burden.
The senior State Department official told CNN, “We have been extremely flexible with everybody.”
“The safety and security of our people, especially the most vulnerable, is our top priority in this. There’s no perfect prescriptive solution to what we’re doing,” the senior official said.
The senior official said there’s “certainly no target” on the number of people who need to be in the office, noting that “it’s completely based on the individual bureau, the mission criticality of the folks and the need to come here and execute what they need to do.” The official said they’ve been “trying to communicate with employees as much as possible” to assuage concerns.
“We’re doing everything we can to comply with best guidance, and are only going to advance in phase when the conditions warrant it and no sooner. We’re not trying to put pressure on anybody,” the official said.