The somewhat positive tone sought to obscure a cold reality, according to people briefed on the talks: the two sides remain nowhere near a deal.
Bottom line: The top Democratic and White House negotiators have now held six closed-door meetings, for more than 10 total hours, over the course of eight days. By their own admission the most recent meeting was deemed productive because the two sides had a better understanding of their disagreements — after six meetings. The two sides are still figuring out one another’s disagreements. No amount of positive spin can cover up just how long — and rocky — the path toward a final agreement remains.
What to watch: Treasury Secretary Steven Mnuchin and White House chief of staff Mark Meadows will be back on Capitol Hill for meetings. Senate Republicans hold their closed-door conference lunch at 12:45 p.m. ET, with a leadership news conference afterward.

Read More
The area where there was at least some progress on Monday was on the education piece of the broader proposals. Republicans have put $105 billion on the table, split between K-12 and colleges, with a chunk of the funds directed explicitly toward the costs associated with schools that are reopening. Democrats remain wary of tying anything to reopenings amid the pandemic and have pressed for more topline money.
But the negotiators did a deep dive into the numbers on Monday, which is a key step toward starting to lay the groundwork for what is actually needed for an agreement.
As Senate Democratic Leader Chuck Schumer put it: “By going to these specific numbers and what each side thinks they can do with their dollar allocation, it really helps us understand that and move together in a better direction. That’s what we spent time doing.”
Again, that seems like a fairly pro forma part of any negotiation, but getting to a more granular level has been something that’s been missing from the talks up to this point.

House Speaker Nancy Pelosi laid out an unvarnished read of the current state of the negotiations in a private call with her caucus on Monday afternoon, according to two people on the call.
As Pelosi ticked through the biggest priorities for any agreement — from education, to Supplemental Nutrition Assistance Program, to unemployment benefits to state and local funding, Pelosi made clear there has been little or no progress toward an agreement on any of them. 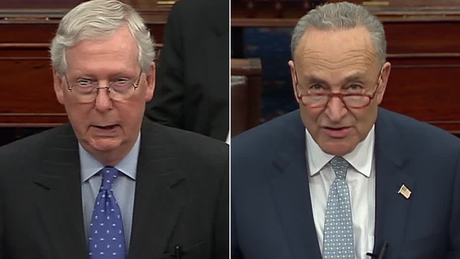 As nation grapples with crisis, McConnell and Schumer aren’t negotiating — with each other
She reiterated that funds for the Postal Service and money for election protection remains “a big fight for us.”
But, according to one of the people, she also expressed clear confidence that White House negotiators would start moving her way. (On state and local funding, she noted that while GOP negotiators haven’t moved off their proposal of no new money, they soon would do just that. They “just don’t know it yet” Pelosi told her members.)
Pelosi’s comments underscore the view among Democrats right now — that they hold the cards and that it’s only a matter of time before the Trump administration, cognizant of the need to avoid an economic collapse with potentially massive electoral consequences, will come their way.
And yet: There is still no tangible evidence that will actually occur. On the federal unemployment enhancement, one of, if not the, central flash points in the talks, Pelosi and Schumer made clear that the White House has not moved off its longer-term proposal of cutting down to $200-per-week the original $600 flat rate.
“They’re sticking to their position,” Schumer told reporters on Monday. “And we’re sticking to ours,” Pelosi quickly followed.

President Donald Trump is more or less absent from the current talks, save for tweets and verbal jabs directed at Pelosi and Schumer, though Mnuchin and Meadows have made clear he’s briefed regularly.
That has left all eyes, both from Democrats and Republicans, on Meadows and Mnuchin. It’s a dynamic, several people involved tell CNN, that nobody has quite figured out yet. 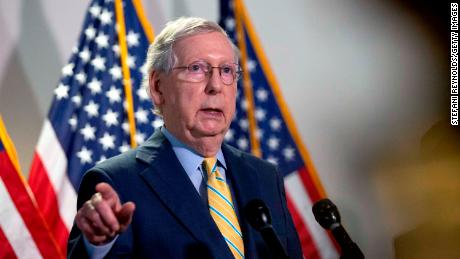 Pro sports players associations come out against key McConnell stimulus priority
Mnuchin is known as the deal maker in the administration. He’s been crucial to locking in several deals with Pelosi, including the prior emergency coronavirus relief packages. He regularly cites those deals and his relationship with Pelosi, both publicly and privately, as something that underscores his integral role in the administration, people who speak to him say.
But that deal making has regularly rubbed Senate Republicans the wrong way, and the trust in him remains fairly low, multiple Senate Republicans tell CNN. Still, at a time of fractured partisan politics, he’s one of the few people in town that can claim negotiating success.
Then there’s Meadows, the former GOP congressman whose career was spent primarily blowing up deals and creating major headaches for his leadership in his role as leader of the conservative House Freedom Caucus.
While he was the incoming chief of staff for the original $2.2 trillion relief bill, he wasn’t a key negotiator. That was left to Mnuchin and since departed White House legislative affairs director Eric Ueland, a former long-time Senate staffer who played a central role at the time.
How the Meadows-Mnuchin team works through the current complex dynamic remains an open question to, well, just about everyone.
Schumer, in the closed door meeting, joked about the public perception of the two, according to one source — nothing that Mnuchin was there to make deals and Meadows was there to blow things up. His point, the source said, was trying to figure out who was playing which role this time around, noting that it was Mnuchin who should bring Meadows along toward a deal. The answer to whether that ends up being the case will go a long way to determining when — and if — a deal is possible at all.

Pelosi, on the call with her members, made clear that the goal for Democratic negotiators is to reach an agreement this week. But she acknowledged the reality of the current state of play, noting, according to the person on the call, “I don’t know if that’s possible.”
In other words, negotiators are already looking toward next week as the likeliest timeline — which is two weeks after the deadline that was supposed to spur action: the expiration for the federal unemployment benefit enhancement.

Sen. John Cornyn, a Texas Republican and member of McConnell’s leadership team, underscored a dynamic that is about to become much more relevant if things continue apace with no progress. 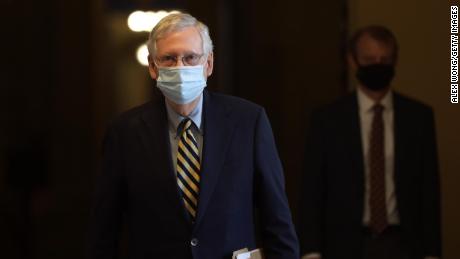 McConnell signal to Republican Senate candidates: Distance from Trump if necessary
“I can’t see how we can go home and tell people we failed,” Cornyn told reporters Monday night. “I think that’s going to be a lot of pressure on everybody to come up with something.”
Cornyn is not only a senior member of the conference who helped draft a central piece of the GOP proposal, but he’s also up for reelection.
A missing piece of the cloistered last week of talks has been members up for reelection, particularly those in tough races, and their desire (and political need) to reach an outcome. That’s not exclusive to Senate Republicans. It applies to House Democrats as well. If, and when, more of those members start making the case Cornyn made on Monday, the overall dynamics may start to shift.

The focus, up to this point, has been entirely on the top four negotiators. That’s about to shift.
McConnell, this afternoon, will lay out a Senate floor process that will include several votes on extending unemployment benefits and potentially other policy issues for the latter half of this week, likely starting Wednesday.
It’s something the Kentucky Republican teed up last week as a backstop of sorts — should no progress be made by the negotiators, he’d start a process moving on the floor. It’s not a process that will lead to an outcome in and of itself, but it will be designed to force Democrats onto the record on specific policy issues and, perhaps, spark talks amongst members. It’s a political exercise to a degree, but in the absence of any other major progress, also an effort to kick something, anything, into gear.