According to the federal indictment, the three men — Brian Kolfage, Andrew Badolato, and Timothy Shea — conspired with Bannon to profit off the wall-building effort, funneling money to themselves through sham nonprofits and shell corporations even as they publicly insisted every dollar donated would go to constructing a border wall.
And all three mixed conservative causes with business ventures since long before the “We Build the Wall” GoFundMe raised $25 million dollars after going viral in 2018. None of the three responded to requests for comment from CNN. 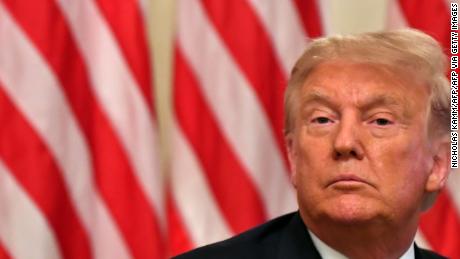 Fact check: Trump knows most people involved in private border wall project, despite claiming not to
In the wake of the indictment Thursday, President Donald Trump played down his relationship with Bannon, his former chief strategist, and said he didn’t know the other defendants. But his son, Donald Trump, Jr., once attended a 2019 event for the wall-building effort where he praised Kolfage by name and shook his hand.
“This is private enterprise at its finest,” Trump Jr. declared at the time, adding that the project was “showing really what capitalism’s all about.”
Read More

Kolfage, 38, was the public face of the We Build The Wall effort. An Air Force veteran and Purple Heart recipient who had both his legs and his right arm amputated after being injured in a 2004 explosion in Iraq, according to multiple news reports, he cut a telegenic image for the wall-building campaign.
Before starting the wall GoFundMe, Kolfage helped run several right-wing Facebook pages and websites that shared conspiracy theories and false political news. 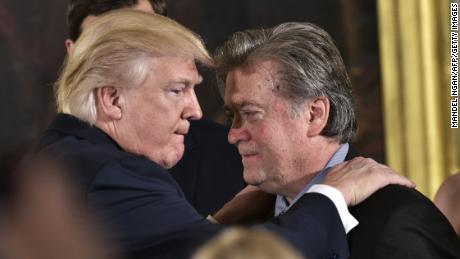 A list of Trump associates and their legal entanglements
At one website, FreedomDaily, Kolfage urged writers at the site to post fake stories with photoshopped images such as Hillary Clinton in handcuffs, former employees told BuzzFeed News last year. Kolfage told NBC News last year that he only managed the site’s finances and the site’s owner lived in another country, but employees told the network he ran it on a day-to-day basis. The website was sued in February 2018 for accusing the wrong man of fatally running over Charlottesville protester Heather Heyer with a car; Kolfage was not named in the suit. 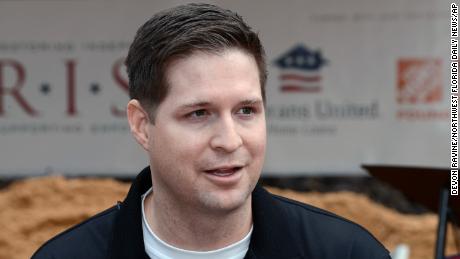 A Facebook page he ran, Right Wing News, was taken down by the company in October 2018, part of a removal of several hundred pages that Facebook said violated rules against “spam and coordinated inauthentic behavior.” He then started another GoFundMe page titled “Fight 4 Free Speech” to raise money for legal action against Facebook. The campaign raised about $73,000 but failed to meet its $100,000 goal, according to an archived version of its webpage, which is no longer online; it’s unclear what happened to the money. 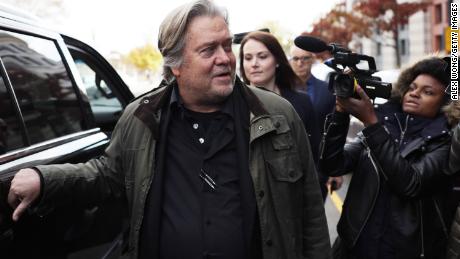 Two members of Bannon’s border wall funding group raided by federal agents
According to the Thursday indictment against the wall partners, the co-defendants conspired to pay Kolfage a salary with donors’ money, even as he publicly maintained he wouldn’t take any compensation. Kolfage, according to the charges, spent more than $350,000 of the donations on personal expenses, including cosmetic surgery, a luxury SUV, a golf cart, home renovations, jewelry, personal tax payments and credit card debt.
In a statement posted to his Facebook page, Kolfage wrote that he was “amazed at how the indictment got so much wrong,” and said “Democrats love a good political witch hunt before the elections.” The prosecution of Kolfage and the others is being conducted by the Justice Department.
The indictment said Kolfage used some of the money he took from the organization to make payments towards a boat. The indictment also identified a boat named Warfighter as property derived from the defendants’ proceeds. Last month, Kolfage posted an Instagram video showing Warfighter taking part in a Trump “boat parade” in the Florida panhandle. 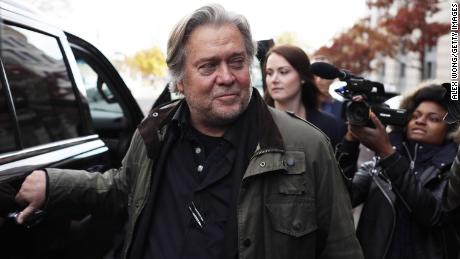 Steve Bannon, three others charged with fraud in border wall fundraising campaign
More recently, Kolfage has been a guest on Fox News and other conservative media outlets. He called into Bannon’s pro-Trump podcast, “War Room,” to talk about the border during an episode released Wednesday, the day before the charges were announced.

According to the indictment, Badolato, a 56-year-old Florida-based investor, participated in a “secret agreement” to pay Kolfage, and after Kolfage told Badolato to direct payments to Kolfage’s spouse, the non-profit filed a tax form that falsely said she was paid for “media.”
Badolato, who has launched various venture capital and tech companies over the last two decades, has a personal history with Bannon that dates back at least to the early 2000’s. 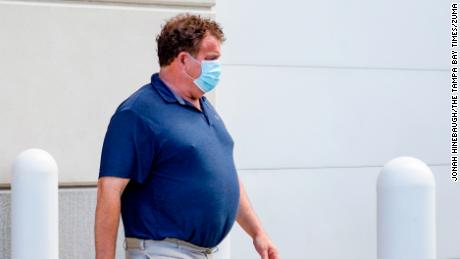 He wrote articles for the Pro-Trump news site Breitbart in 2014 and 2016, when Bannon served as the news outlet’s chairman, crunching numbers about Hillary Clinton’s troubles in the Democratic presidential primary and bemoaning the fact that he couldn’t find Christmas decorations featuring Jesus at a local CVS. He was listed as an associate producer on the 2016 documentary “Clinton Cash,” which Bannon produced.
Badolato and Bannon were directors of the same company, Donna Messenger Corp, according to Florida business records from 2003, and a separate company Badolato co-founded, called The USA Exchange, was listed as a creditor for Cambridge Analytica, the political data firm co-founded by Bannon, according to Cambridge Analytica’s bankruptcy filings. 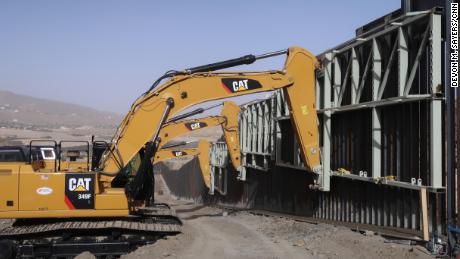 A private border wall project began with a massive GoFundMe campaign that led to a shocking indictment
Bannon even listed the address of a property owned by Badolato when he registered to vote in Sarasota County, Florida, in 2016, according to an administrator with the county’s supervisor of elections.
Badolato’s history also includes financial struggles. He has repeatedly filed for bankruptcy, including in 2014 when he filed for Chapter 7 bankruptcy and listed his liabilities as ranging between $1 million and $10 million. The case was dismissed that year. A 2013 filing in a separate bankruptcy case stated he owed more than $15 million to creditors.
He has also faced more than a dozen state and federal tax liens. While some amounted to a few thousand dollars, a lien filed in 2002 said Badolato owed the federal government about $517,000.
An attorney for Badolato told the Sarasota Herald-Tribune in 2018 that Badolato at that time had never been charged with a crime nor been the subject of any “regulatory body investigation, proceeding or hearing.”

According to the indictment, Shea was involved in the early operations of the wall crowdfunding campaign, and then created a shell corporation in April 2019 to secretly filter donations from the wall-building group to himself and Kolfage — payments described as “social media” charges.
A 49-year-old real estate agent in a Denver suburb, Shea and his wife Amanda have been involved in conservative causes and another political crowdfunding effort with Kolfage. According to Colorado corporate records and his Facebook page, Shea runs Winning Energy, a pro-Trump energy drink company that sells a drink described on its website as “12 invigorating ounces of liberal tears.” It comes in a can with a picture of Trump in a superhero costume in front of a bald eagle and an American flag. 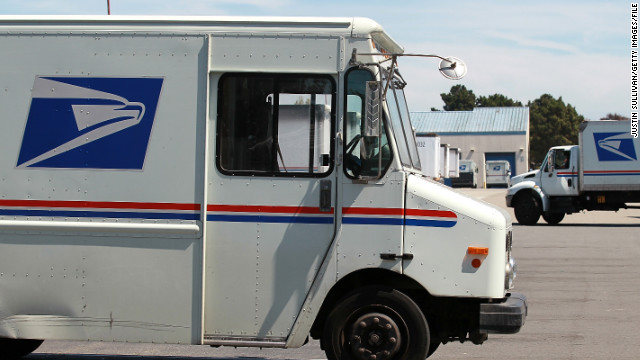 What is the Postal Inspection Service?
Amanda Shea lists herself as the CFO for We Build the Wall on her Twitter page, and she told a local Colorado news site in 2019 that she had helped Kolfage set up the GoFundMe. According to an Instagram post, she and Kolfage both worked on Right Wing News, and helped set up his previous “free speech” GoFundMe.
Both Sheas have also racked up a long record of federal, state and local tax liens, and the couple filed for bankruptcy in 2011.
Shea appeared before a federal magistrate in Colorado Thursday, but he did not enter a plea, according to the court. Amanda Shea was not charged in the indictment.