When confronted with the US’ daily death toll and Trump’s messaging on the pandemic during an interview with Axios on HBO that aired Monday night, the President grew defensive and appeared frustrated by Jonathan Swan’s questions about the crisis.
“I’ve gone to your rallies. I’ve talked to your people. They love you. They listen to you. They listen to every word you say. They hang on your every word,” Swan said. “And so when they hear you say, ‘everything’s under control. Don’t worry about wearing masks,’ I mean, these are people — many of them are older people.” 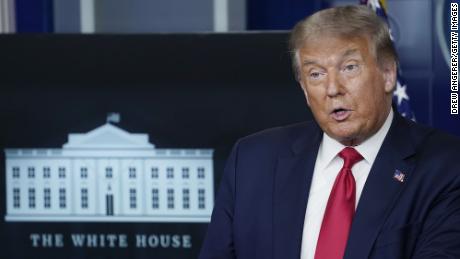 Trump spinning virus failure as a win again by celebrating ‘encouraging’ progress
“Well, what’s your definition of control?” Trump replied, adding: “I think it’s under control.”
“How? A thousand Americans are dying a day,” Swan said.
Read More
“They are dying. That’s true. And you — it is what it is,” Trump said emphatically. “But that doesn’t mean we aren’t doing everything we can. It’s under control as much as you can control it.”
Trump has frequently defended his administration’s performance to the pandemic but rarely expresses grief for the victims. When the US surged past 100,000 confirmed deaths in late May — after weeks of Trump projecting a toll well short of that mark — the President declined to make a public statement until the next day, tweeting about the victims amid a morning tweetstorm of insults and grievances.
When pressed on the US death toll in the Axios interview, Trump repeatedly pointed to the proportion of deaths to confirmed coronavirus cases, rather than the proportion of deaths to the US population, a figure that is arguably more telling of the state of the pandemic in the country given that the US has less than 5% of the world’s population but around 25% of global deaths from Covid-19. 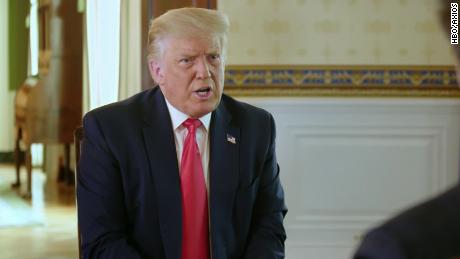 Trump cites Lewis’ decision to not attend inauguration to downplay legacy of civil rights icon
“Well, right here, United States is lowest in numerous categories. We’re lower than the world, we’re lower than Europe,” Trump said as he sorted through pages of charts, handing one to Swan. “Take a look, right here — here’s case death.”
“Oh, you’re doing death as a proportion of cases. I’m talking about death as a proportion of population. That’s where the US Is really bad,” Swan said.
“You can’t do that … you have to go by the cases. The cases of death,” Trump argued.
“It’s surely a relevant statistic to say if the US has X population and X percentage of death of that population, versus South Korea,” Swan later said, to which Trump replied: “No, because you have to go by the cases.”
To the contrary, officials on the White House coronavirus task force have been warning that the pandemic is worsening in the US. On Sunday, Dr. Deborah Birx, the response coordinator for the group, said that the US is in a new phase of the pandemic where the virus “is extraordinarily widespread.” Trump replied on Monday, calling Birx “pathetic.”
More than 155,000 Americans are known to have died from the virus, and the death toll is projected to reach 173,000 by August 22, according to a new composite forecast from the US Centers for Disease Control and Prevention. That’s an average of almost 1,000 US deaths every day for the next 30 days.

For comparison purposes, most public health experts prefer rates, not counts. The different measures Swan and the President discussed are two of the most popular: case fatality ratio, which measures the number of deaths divided by the number of cases, and the rate per total population.
By the measure Swan used, the growth in the mortality rate continues to trend upward, while by the measure Trump referenced, the mortality rate decreased between June 17 and July 26 from 5.47% to 3.47%, where it has hovered since, according to data from Johns Hopkins University. It’s not true that “you have to go by the cases,” as Trump claimed, but doing so in this instance allows the President and the White House to support their narrative that the virus is “under control.”
When using the case fatality rate, or “case death,” as Trump called it, to describe the severity of the impact a virus like Covid-19 has on a country, it’s worth noting that a higher testing rate leads to a lower case fatality rate, and the US has significantly increased testing since its case fatality rate peaked in March. Data on deaths overall also tend to lag, so they often don’t reflect the current situation.
On a call with governors Monday afternoon, Birx noted as much, saying: “We do see a probably continuous rise in mortality over the next two weeks, and I think that’s really important for the other states that are in this category to not let your citizens get discouraged that they’re not seeing progress, because you are seeing progress, it’s just the whole site takes about 6-8 weeks to move through that increased test positivity, increased cases and increasing mortality.”