“China will own the United States if this election is lost by Donald Trump,” Trump, referring to himself in the third person, told conservative radio host Hugh Hewitt. “If I don’t win the election, China will own the United States. You’re going to have to learn to speak Chinese, you want to know the truth.”
His remark was the latest escalation in a contest with former Vice President Joe Biden over who can sound toughest on China, a battle that has become a central facet of the presidential campaign.
Trump blames China for failing to contain the spread of coronavirus and concealing information about the disease in its early stages. He says his once-chummy relationship with Chinese President Xi Jinping has soured. And his administration has taken a series of actions that have heightened tensions with Beijing, including this week with the highest-profile visit by an American official to Taiwan in decades.
Yet even as the administration ratchets up pressure, Trump himself has declined on multiple occasions to condemn some of China’s most provocative moves.
Read More
Pressed in the same interview Tuesday on a claim his former national security adviser made recently — that Trump told Xi to proceed with detaining Uyghurs in camps in western China — Trump chose not to condemn the repression.
Instead, he offered a cursory denial of John Bolton’s claim while trashing his former aide.
“Who would ever say a thing like that? He made it up. He made up everything,” Trump said. “John Bolton is a sick person. And John, and he’s not a smart person.”
In his book, Bolton wrote Trump discussed the detention camps built by the Chinese government for Uyghurs in western China during a dinner at the G20 last year.
“With only interpreters present, Xi had explained to Trump why he was basically building concentration camps in Xinjiang. According to our interpreter, Trump said that Xi should go ahead with building the camps, which Trump thought was exactly the right thing to do,” Bolton writes.
The US State Department estimates that more than one million Uyghurs, ethnic Kazakhs, Kyrgyz and members of other Muslim minority groups have been detained by the Chinese government in internment camps, where they are reportedly “subjected to torture, cruel and inhumane treatment such as physical and sexual abuse, forced labor and death.”
Secretary of State Mike Pompeo has called Beijing’s actions in Xinjiang “the stain of the century.” 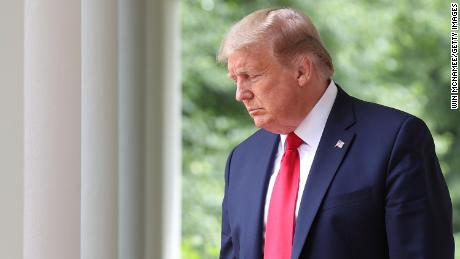 US-China relations are at an all time low, but Trump still seems unsure how to handle Beijing
Yet Trump has voiced little public concern about the actions, and said in an interview earlier this month that he held off imposing sanctions on China because he was negotiating a trade deal.
Similarly, during a private phone call last summer with Xi, Trump promised that the US would remain quiet on pro-democracy protests in Hong Kong while trade talks continued, two sources familiar with the call told CNN last year.
Trump’s parallel responses to the ethnic repression and the Hong Kong protests illustrate an unfolding dynamic as he works to paint Biden as an unworthy negotiator. Even as he seeks to project toughness, Trump has a history of praising Xi and remains hopeful at salvaging the China trade deal which remains his signature foreign policy achievement.
In another radio interview Tuesday, Trump seemed more focused on the potential upsides for the United States to the political crackdown in Hong Kong, which his government has decried.
“For years Hong Kong was making a lot of money that we could have been made that we could have been making in the New York Stock Exchange and our great exchanges,” he told Clay Travis on Fox Sports Radio, adding later: “We gave tremendous incentives that cost us a fortune to keep Hong Kong viable and going, and now what we’ve done, I’ve ended everything, I’ve ended all of that. There is no incentive whatsoever. We’re not sending money through incentives back down, we’re going to make a lot more money because they’re not going to be competitive.”
Trump said the geography of Hong Kong — which sits partially on an island off mainland China — made it complicated to challenge China’s authority.
“Take a look at a map, it’s attached to China. So it’s a little bit tough from certain standpoints, but we will do very well by not having a good competitor, I guess it’ll be a competitor but on a much smaller scale,” he said.
Trump’s remarks came amid an increasingly tough stance his own administration is adopting toward China.
Last week, the US sanctioned Hong Kong Chief Executive Carrie Lam as well as 10 other Chinese and Hong Kong officials for their role in crackdowns on political freedom in the region. That came after Trump revoked Hong Kong’s special status on trade in May.
Also last week, the administration began proposals that would delist Chinese companies from US stock exchanges. And Trump took steps to ban TikTok, which is owned by a Chinese company, from the United States.
The administration has also closed a Chinese consulate in Houston, toughened its position on the South China Sea and worked to persuade allies not to allow Chinese mobile giant Huawei onto their 5G networks.
And this week, US Health and Human Services Secretary Alex Azar visited Taiwan and met with President Tsai Ing-wen, the highest-level meeting between Washington and the self-ruled island in decades. The visit was condemned by Beijing, which regards Taiwan as Chinese territory.
Yet despite US-China relations sinking to historic lows, Trump himself has declined to speak out forcefully on the human rights abuses. Instead, he has focused his attention on China’s actions on the coronavirus, which he said have caused his relationship with Xi to suffer.
“I had a very good relationship with President Xi. I would even say better than good. I would say we had a great relationship. He’s a great gentleman. But my relationship is no longer very good with him because of what they did with the China virus,” Trump told Hewitt.
Still, his beef with China appeared centered on how the country’s failure to contain the virus has affected his political standing.
“George Washington would have had a hard time beating me before the plague came in, before the China plague,” he said.