“If there is a stone that needs to be turned that is left unturned,” Giroir said on CNN’s “State of the Union” on July 26, “you tell me what it is.” 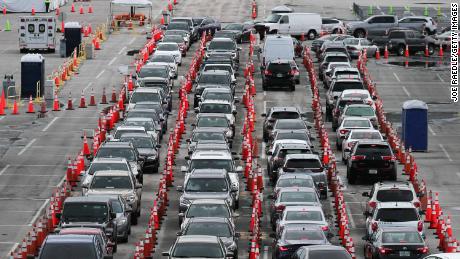 Covid-19 testing: A spike in demand, a delay on results
CNN asked more than 20 public health and lab industry sources whether Giroir and the administration were doing all they could to fix the country’s testing problems and there was an overwhelming consensus: No.
What’s most needed, they said, was for the federal government to seize a larger leadership role in coordinating a focused national effort aimed at identifying and solving issues in the testing supply chain and providing better guidance to health workers on how best to use limited resources. Their recommendations come as test results often take multiple days or more, which can stunt health officials’ abilities to effectively track the spread of the virus.
Some lab directors broadly argued the White House’s testing blueprint, which largely placed responsibility on states to develop their own testing plans, reinforced a patchwork system that has exacerbated current challenges.
Read More
“I don’t see a national plan in place. I see some state level plans,” said Omai Garner, who directs clinical microbiology testing for UCLA Health. “We need a national testing strategy, absolutely.”
A spokesperson for the Department of Health and Human Services disputed that saying, “What is right for Florida, is not right for Massachusetts, at this point in the pandemic. That is why a single national plan is not appropriate, as opposed to national principles and a blueprint, that we implement on a state and local level.”
The HHS spokesperson said the administration works with states everyday on testing to assure they are focused on meeting goals and each week provides governors with recommendations.
Here are five things these experts say need to be done now to address the testing problems.

While Giroir says the US is now averaging more than 800,000 coronavirus tests per day, manufacturers of test components warn that demand still outweighs supply. The resulting supply shortages have hampered the number of daily samples many US labs can test.
One lab company in New Mexico, for example, says it could perform about 10,000 tests per day but that number is currently down to about 3,700 per day.
“Most the time we are not running at full capacity,” said Karissa Culbreath, medical director of infectious disease at TriCore Reference Laboratories, who said her company is receiving limited amounts of reagents, which are the chemicals used to perform the tests.
While the Trump administration has procured and distributed to states tens of millions of individual testing supplies, some public health and industry sources say supply shortages are still rampant and the government should better coordinate the distribution of supplies to reduce zero-sum competition between labs and government agencies.
The Association of American Medical Colleges, for example, has called on the government to create a centralized web portal where labs and suppliers could share and collect information about shortages.
Heather Pierce, AAMC’s regulatory counsel, says more can be done.
“It would be far more efficient if there was a transparent and clear strategy,” said Pierce, who added that the government should publicly share more information about the extent to which it has directed certain suppliers to send equipment to certain types of labs.
The HHS spokesperson said the agency welcomes the opportunity to work with other organizations such as the AAMC on distribution efforts, but said the idea of the government managing supplies for every lab “is not a realistic solution.”

Calls have also increased for the Trump administration to make more strategic use of the Cold War-era Defense Production Act.
The Trump administration has invoked the DPA to ramp up production of testing swabs as well as ventilators and other equipment, but some health experts have pressed the administration to use the law more aggressively.
The Rockefeller Foundation, a nonprofit group that has been working with scientists to combat the virus, published a road map for increased testing that said the US needs to greatly expand capacity to be able to perform 30 million tests per week by October.
As part of that effort, the plan stated the government should “immediately invoke” the DPA to increase chemical reagents for tests, which it called “one of the major sticking points” in the supply chain.
“The only way you’re going to get a huge amount of volume of supply at that level is with real intervention and real action,” Dr. Rajiv Shah, the foundation’s president, told CNN.
Some industry groups have cautioned against certain applications of the DPA, arguing that too much intervention could lead to inefficiencies. 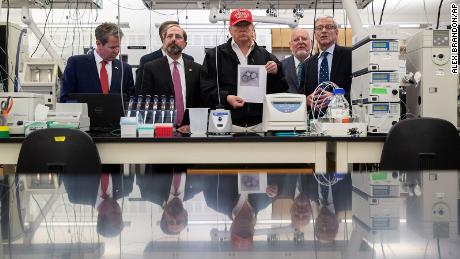 How coronavirus testing fumbles squandered valuable time
AdvaMed, a trade association that last month announced a national registry to help coordinate diagnostic supplies, asked the White House in a July letter not to use the DPA “to orchestrate a takeover” of manufacturing. Though AdvaMed did welcome the government’s use of the law to “channel relevant supplies away from nonessential industries to our industry.”
One manufacturer of coronavirus tests and diagnostic instruments, Roche, said it was already operating at full capacity so nothing would be gained by more government action.
A Roche spokesperson added that the company has increased capacity three-fold since the beginning of the year but said “there is simply not enough supply to meet demand.”

In the midst of dwindling supplies, some labs have faced tough choices on how to best use the capacity they do have. Lab directors and others told CNN they could use better direction from the federal government on how to design strategies to screen for the virus within communities.
Kelly Wroblewski, the director of infectious disease programs for the Association of Public Health Laboratories, said public health labs would benefit from more national guidance on how to prioritize testing in order to meet goals of both testing high-risk populations and identifying people who may be infected and spread the virus without showing symptoms.
She said the government has asked states to come up with plans to test vulnerable populations such as minority communities and people in long-term-care facilities. “But instead of asking each state to describe their approach, providing guidance on how one might approach that would be helpful,” Wroblewski said.
Shah, of the Rockefeller Foundation, said some essential workplaces like meatpacking plants have already begun screening for sick employees, but he said with more people returning to school and work, the Centers for Disease Control and Prevention should issue protocols for doing so effectively.
The CDC has released some guidance for testing asymptomatic people, but Shah and others said more detail is needed.
“If you’re a teacher, if you’re a health care worker, if you’re an essential worker in a sanitation division in a city that critically depends on your efforts, you’re out there doing your job and asked to do your job without the benefit of support for testing,” said Shah, who noted some professional athletes have had regular access to testing. “That’s not fair and that’s not right.”
Julie Khani, the president of the American Clinical Laboratory Association, whose members include commercial labs, said ACLA recently received guidance from HHS to prioritize samples from nursing home patients in certain hotspots and said, “Continued clear direction is critical to better manage demand.”

Health experts said the federal government could be doing a better job of sending a clear public message about the importance of social distancing, mask-wearing and hand washing to prevent the spread of infection, which would reduce overall demand for testing.
While Giroir and others on the White House Coronavirus Task Force have emphasized such messages, others within the administration, particularly the President, have repeatedly flouted them.
“All of the pieces have to work together for a full strategy that works. If we only focus on testing and not prevention, we will never have enough tests. If we only focus on prevention without testing, then we won’t be able to identify those infected,” Culbreath of TriCore said. “It really takes a coordinated effort.”

Ensuring tests are paid for

Public health officials also said increased government funding and insurance coverage must be part of the solution to solve ongoing test problems.
The Families First Coronavirus Response Act passed in March required that insurers cover costs of tests when “medically appropriate,” but a spokesperson for Minnesota’s Department of Health, for example, told CNN the state would like the federal government to more broadly define testing as a medical necessity for a wider group of people.
A letter from about 50 health and business groups on July 21 called on congressional leaders to fund expanded access to Covid-19 testing for all people, regardless of insurance coverage or reason for being tested.
“Without such funding, and with demand increasing, Americans will only see a reduction in access to testing, as well disruptions in clinician, hospital, and laboratory payments, diminished public health surveillance capacity, and higher insurance premiums,” the letter said.
CNN reported last month that the White House initially pushed back against Senate GOP requests to significantly boost funds for testing and contact tracing. Stimulus negotiations, which include proposals for test spending, are ongoing.