Trump came across as ill-prepared, narcissistic and far from in control of the coronavirus pandemic. It was a far cry from the image of courageous leadership and energetic, unstinting commitment on behalf of Americans that his aides spend every day trying to sketch.
It is hard to remember an interview in which a sitting President was more unsparingly exposed or seemed so unequal to the magnitude of a crisis that is threatening the American people and is nowhere near ending. 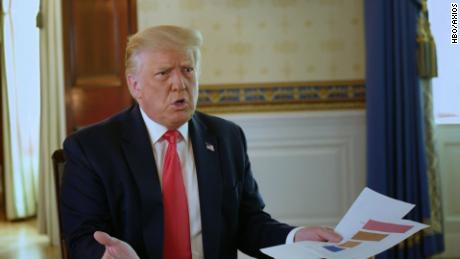 Trump on Covid death toll: ‘It is what it is’
And Trump’s sit-down with Swan came about a month and a half before his first presidential debate clash with presumptive Democratic nominee Joe Biden. His struggles offer plenty of fodder for Biden’s debate prep team as they plot his strategy and train up their man for what could be the most important moment of the most unusual presidential campaign.
When Trump was fact-checked in real time, Trump’s flame-throwing interview technique fizzled. When Swan frustrated his scattershot attempts to jump to another subject, Trump wilted. Under pressure, he provided the kind of offhand remark that could define a political race if properly used by an opponent.
Read More
“It is what it is,” Trump said, appearing callous and disconnected about a Covid-19 death toll that has reached 150,000 Americans. When he was challenged, Trump responded with nonsensical answers, grasping for a counter to simple questions about his handling of the pandemic.
“We’re lower than the world,” Trump said in an incomprehensible response when pressed on why the US has a death toll that averaged 1,000 a day in recent weeks and is expected to go ever higher. When he made the unfounded claim that there are “those” who say there can be too much coronavirus testing, Trump bizarrely claimed “books” and “manuals” said so.
The interview was unrecognizable from the friendly, unchallenging conversations he enjoys with Fox News opinion hosts and other conservative media figures, who play into the President’s craving for adulation that is also often provided by subordinates like Vice President Mike Pence.

There is a long tradition of presidents, complacent and unprepared, walking into a debate clash with a challenger. Presidents are not used to people getting in their cage. They’ve spent four years flying around the world in Air Force One and seeing people stand when they walk into a room.
In 2012, President Barack Obama was roughed up by his challenger Mitt Romney after infuriating his campaign staff with his unfocused manner at his debate camp.
In 1992, President George H.W. Bush never seemed the equal of the younger Bill Clinton. In their second encounter, with an infamous glance at his watch, he played into played into his challenger’s claims that he was oblivious to the suffering of ordinary Americans amid a recession. 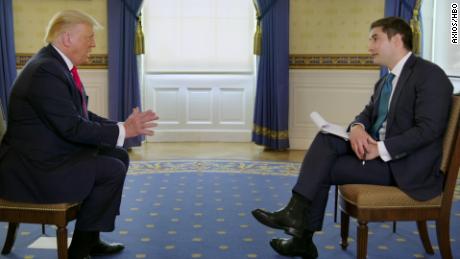 Jonathan Swan reveals the simple secret to exposing Trump’s lies: basic follow-up questions
In 1984, President Ronald Reagan struggled through his first debate with Democratic nominee Walter Mondale, playing into Democratic claims that he was too old and tired to win a second term. Only a stellar performance in a second debate, that contained one of the greatest presidential zingers of all time (“I am not going to exploit, for political purposes, my opponent’s youth and inexperience,”) rescued Reagan.
Two of those three presidents roused themselves and went on to win reelection weeks later. But they got the kind of wake-up call that Trump received in his Axios interview. The question now is whether a President who prizes gut calls and abhors preparation and details will hear a similar message.
Trump is so unpredictable and adept at bending the medium of television to his will that he could well put on a strong performance at the debates that convinces wavering supporters to return to his fold. Or he could so disorientate Biden — who has spent months out of the spotlight during the pandemic — that the Trump campaign’s claims about his capacity find some traction. The President might be able to draw Biden into the kind of catastrophic error or flustered responses that harm his campaign and make him seem unfit for the presidency.
Trump’s aides often talk about how good he is at counterpunching.
But a presidency-saving performance will require focus, practice, a willingness to examine his own liabilities and the kind of empathy for Americans stuck in a seemingly endless national nightmare that Trump demonstrably failed to show in his Axios interview.

Trump’s struggles were ironic, considering that his campaign has spent the week whipping up a false narrative that Biden is trying to dodge Trump, as they try to goad the challenger into more than the three encounters run by the Commission on Presidential Debates. Behind in the polls, and robbed of the rallies that enable him to dictate the political battlefield, Trump may need a knockout against Biden to save his presidency when Americans cast their votes in November.
The debates this year figure to be especially crucial since the pandemic and consequential social distancing have eviscerated the normal campaign calendar. The conventions, from which sitting presidents could expect to get a polling “bounce,” will be more muted online affairs.
So if the President is still trailing in the polls at the end of September, the first debate will represent a rare chance to line up Biden on live television for a devastating attack. 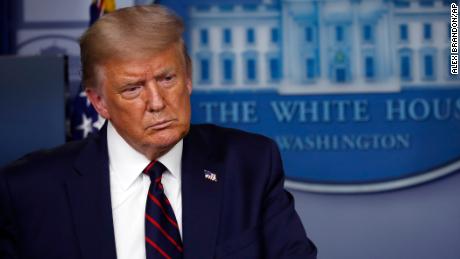 Fact check: Trump litters briefing with false, unsubstantiated claims on voter fraud, Covid response and Beirut explosion
View Trump and Biden head-to-head polling
The apparent theory of the Trump campaign is that Biden is so confused, waffling and deprived of his faculties at the age of 77 that he will be overwhelmed and be exposed as unfit for the Oval Office.
It’s true that Biden, on the crowded Democratic primary debate stage, didn’t come across as the cocky wisecracking debate champion that he was at times in the 2008 campaign and again in 2012 when he helped steady Obama’s campaign.
Yet the gravity of the times, and the emotional turmoil that Biden has endured since then with the death of his beloved son Beau, have clearly shaped his character — and may actually suit a time of national tragedy when voters might be looking for consolation.
“There’s an active push to get Joe Biden to not debate my father because, honestly, no one can look at Joe Biden and say this guy’s all there, right,” Trump’s son Don Jr. told Iowa radio host Jeff Angelo.
Trump Jr.’s claims that Biden is trying to dodge the debates and that he’s being helped by the media is false. But it reflects an attempt by the Trump campaign to goad their opponent into more direct clashes with the President. In the 2016 campaign, Trump torched his debate rivals by bullying them, breaking all the rules and launching searing personal attacks, putting his foes off balance and thwarting the efforts of moderators to rein him in. His style hinted at the rule-breaking and insurgent campaign he would run as the Republican nominee and his presidency. It’s no surprise that Trump’s campaign believes it can pull a similar number on Biden.
Most commentators awarded the 2016 presidential debates to Trump’s challenger Hillary Clinton on substance. But Trump put in the kind of unchained performance that his anti-elite supporters loved. It’s unclear whether a similar attitude, when he bears responsibility for the government’s poor response to Covid-19, would be effective.
Visit CNN’s Election Center for full coverage of the 2020 race
Already, Trump’s performance in recent weeks and the facts of the pandemic — which is spreading ever wider in the country, while America’s foreign friends did a better job of getting it under control — have gutted his campaign narrative of a “transition to greatness.”
And there is a growing sense that Trump’s talent at manufacturing alternative realities — that helped him ride out the Russia scandal and impeachment — is falling short during the pandemic, given the grim situation in the country.
His encounter with Swan was not the first time in recent weeks in which Trump has almost seemed to be mocked by an interviewer — an invidious position for a President whose power relies on the elevated symbolism of his office.
“Fox News Sunday” anchor Chris Wallace appeared to ridicule the President’s claims of acing a cognitive test when he told the President the questions were hardly tough and included identifying an elephant.
And Trump’s son’s mockery of the challenger could also backfire, so lowering expectations for Biden that a merely competent performance could by itself neuter the claim that he is far less fit for office, than the stumbling President on display in recent weeks.