With the coronavirus resurgent across much of the country, the economy sputtering, Republicans fretting, and Biden enjoying a double-digit lead, the President has now settled on a new line of attack, one that’s actually an old campaign standby for the GOP: labeling his Democratic opponent as too liberal, too radical, and too out of touch with the average voter.
That’s the message of a new pair of Trump ads that launched Monday, which claim Biden has “embraced the policies of the radical left” including higher taxes, amnesty for illegal immigrants, and cutting police funding. The launch ends a temporary pause in the campaign’s digital and TV advertising, announced last week by new campaign manager Bill Stepien as part of an effort to “review” their strategy.
Read More
The result was a reset of Trump’s communications strategy. The campaign’s simplified message on Biden reverts to the pre-pandemic plan of casting the former Vice President as beholden to his party’s left wing — a charge that may be rather difficult to prove given Biden’s image as a moderate counterweight to progressive Democrats.
Biden was often the target of criticism from his more liberal Democratic challenger, Sen. Bernie Sanders, who assailed the party establishment that coalesced around Biden during the primaries. It also doesn’t help the Trump campaign’s case that Biden has explicitly rejected some progressives’ more extreme positions, such as defunding the police.
Still, Jason Miller, a senior advisor to the Trump campaign, told CNN the new approach is about persuading voters that Biden is not who he seems.
“Directionally Biden’s liberal policies really scare people, and more are unaware of the crazy leftist lurch he’s made since the primary,” said Miller. “I would expect them to be fully educated on all of it by Election Day though.”
Miller pointed to a 110-page platform of policy recommendations, released in July, that was negotiated between the Biden and Sanders campaigns after Sanders left the race. The recommendations are largely based on the more moderate positions Biden advocated during the primary but do show a willingness to concede to Sanders and the progressive wing. New York Rep. Alexandria Ocasio-Cortez, for example, has a leadership position on Biden’s climate task force— something the Trump camp is all too eager to highlight. 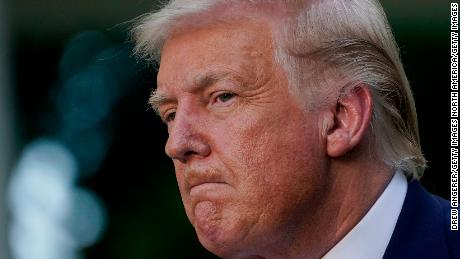 Fact check: Trump deceives about Sanders-Biden task force proposals to make Biden sound ‘extreme’
One of the new Trump ads ends with an image of Biden flanked by photographs of Capitol Hill’s most outspoken left-wingers: Sanders, Ocasio-Cortez and Minnesota Rep. Ilhan Omar. (Both House members supported Sanders in the primary and have since offered their qualified support to Biden for the general election.)
“The radical left has taken over Joe Biden and the Democratic party,” says the ad’s voiceover. “Don’t let them take over America.”
The ad reset continues a broad shakeup of the Trump campaign in recent weeks — a tacit acknowledgement that the President has been losing ground in his race for reelection. Amid the ongoing pandemic, Trump’s political team has had to grapple with conducting a campaign without the large-scale rallies that defined his successful bid for the Oval Office four years ago. Following a disappointing attempt at a rally in Tulsa in June, Trump demoted his campaign manager Brad Parscale and elevated Stepien, the former White House political director, to the top job.
The 42-year-old Stepien has begun to refocus the campaign’s message on Biden. On Monday he made his first public appearance as campaign manager during Fox and Friends, where he promoted the new ads.
“I think you need to judge Joe Biden by the people he’s surrounding himself with,” Stepien said.
Andrew Bates, a Biden campaign spokesman, dismissed the new ads by saying that voters “know Joe Biden” and that the Trump campaign “is locked in a sad and pathetic cycle of bimonthly, shambolic message ‘resets.'”
The new ads rely on a familiar playbook that served the GOP well during Biden’s tenure as Vice President under Barack Obama. Republicans effectively ran against Democrats in both the 2010 and 2014 midterm elections by linking candidates from moderate or swing districts and states to the party’s most liberal members. Nancy Pelosi, the once and future House speaker, was a frequent bogeyman for Republican attack ads during the Obama era.
“This is really effective if you’re running against a candidate who is little known and undefined to the general public,” said Michael Steel, a former aide to Rep. John Boehner when the Ohio Republican was Speaker of the House.
The difference is that Biden already has his own political identity.
“The problem with using it against Joe Biden is the public has an image of him burned in over decades,” said Steel. “Goofy old Uncle Joe, the moderate-seeming Democrat from Delaware and Obama’s wingman.”
That may explain why Trump spends more time talking about the progressive stars in the Democratic Party than he does the presumptive nominee. During a short address to supporters in Tampa on Friday, Trump unloaded on Sanders, Ocasio-Cortez and Omar — at one point humoring a member of the crowd who suggested that Omar should “go back” while another crowd member yelled “deport her”.
“You’re going to get me in trouble,” Trump laughed.
Trump also suggested that Sanders was actually the true standard bearer of the Democratic Party and claimed that the primary was rigged in Biden’s favor. The President then read off a litany of policy positions touted by Sanders and said Biden has no choice but to carry Sanders’ goals into the White House.
In Tampa, Trump name-checked the Biden-Sanders platform as evidence his opponent was too far left, following a trail blazed by his campaign. After this “unity platform” was released last month, Trump spokesman Tim Murtaugh said the document showed Biden was a “Trojan horse candidate” and an “empty vessel carrying the insane wish list of the radical left.” Others who have repeated that language since include Vice President Mike Pence, campaign senior advisor Lara Trump, and Stepien.
“Joe Biden would be nothing more than an auto pen president, a Trojan horse for a radical agenda so radical, so all-encompassing, that it would transform this country into something utterly unrecognizable,” said Pence in Wisconsin in July. “The Biden-Sanders agenda would set America on the path of socialism and decline.”
Some GOP strategists have been urging the Trump campaign to embrace this simpler, familiar message about Biden.
“Mission number one is not allowing Joe Biden to continue to position himself as a nice, moderate grandfather,” said Corry Bliss, a Republican campaign operative. “Anything that helps systematically attack, define, and push him left is smart and helpful.”
But with just 90 days before Election Day and with some states sending out mail-in ballots as early as September, the time for the Trump campaign to define Biden is running out. The fear for Republicans is that it will be difficult to change voters’ perceptions of Biden as a mainstream liberal Democrat.
Pushing the idea may be the only option left for the troubled Trump campaign, said Steel.
“It’s better than nothing,” he said.