The closed-door House briefing was led by the US intelligence community’s top election official, Bill Evanina, and senior intelligence officials who specialize in election security. Officials dismissed the possibility of foreign powers being able to interfere on a mass scale to produce and send fake ballots to voters and election authorities, a source said.
The issue of forged ballots only came up when a lawmaker asked about it, a source in attendance told CNN. Evanina didn’t raise any alarms about that possibility, the source said.
The briefing highlighted the regular clash of views on election security between Trump and the administration’s top officials charged with keeping the November vote secure, both in public and in classified briefings.
For months, those officials have routinely warned that the most serious foreign threats are hacking of election and campaign infrastructure, along with disinformation campaigns, largely from China, Russia and Iran. The issue of fake ballots is one that they don’t raise, according to multiple sources familiar with the ongoing briefings.
Read More
That’s night and day from the President’s almost singular focus on mail-in ballots, which he alleges will lead to a “rigged” election this fall. So great is the threat, the President said Thursday, he raised the possibility of delaying the vote.
On Friday at the White House, Trump specifically claimed that foreign countries will be able to forge ballots.
“This is going to be the greatest election disaster in history,” Trump said.
“And by the way you guys like to talk about Russia and China and other places, they’ll be able to forge ballots, they’ll forge up, they’ll do whatever they have to do,” he said.

The President is so vocal in his distrust of voting by mail that there are concerns among intelligence and law enforcement officials that he is laying the groundwork for the exact sort of foreign disinformation campaigns they warn about.
“They can’t physically do anything about (mail-in ballots) but (they can) create social media narratives to create levels of doubt and play into the debate,” a law enforcement official said. “We are alert for the fact they may take doubts about mail-in ballots and exploit that online.”
The Department of Homeland Security’s cyber arm, the Cybersecurity and Infrastructure Security Agency, released a new assessment on mail-in voting Friday afternoon — just hours after Trump had alleged that Russia and China would “forge ballots” — noting that as the debate over mail-in voting heats up, threat actors can take advantage and sow confusion.
“Mail-in voting has already become an issue among partisan political voices, which makes it a target for threat actors to exploit,” the assessment read. “These threat actors may mislead and confuse the public about the mechanics of mail-in voting, and leverage limited understanding regarding mail-in voting processes, in order to cause chaos and provoke distrust in the election administration and electoral results.”
The report did not mention the possibility of ballots being forged and then counted, focusing rather on the risks to each part of the process, determining they “can be managed through various policies, procedures, and controls.”
A source close to the Trump campaign rejected the notion that what the President is saying amounts to the kind of nefarious disinformation used by adversaries, but admitted the President’s intention usually is to cause chaos.
“The Russians and Chinese are actively doing what they do to influence and sway an election,” the source said. “The President’s tweet, although it carries weight, totally different — his intention is different.”
Evanina also briefs the Trump and Biden campaigns as well as the political parties on election threats. In a July 24 statement on election threats with 100 days to go before November 3, Evanina made no mention of mail-in ballots.
Changing actual votes, he said — as the President repeatedly alleges — is “extraordinarily difficult.”
“The diversity of election systems among the states, multiple checks and redundancies in those systems, and post-election auditing all make it extraordinarily difficult for foreign adversaries to broadly disrupt or change vote tallies without detection,” Evanina said in his statement.
The Office of the Director of National Intelligence declined to elaborate on Evanina’s views on mail-in ballots, saying the statement speaks for itself. The Trump and Biden campaigns also declined to comment on his briefings to them. 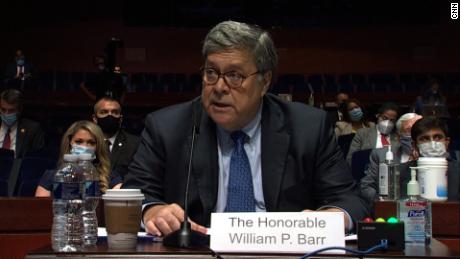 Fact checking Barr’s claim that it’s ‘common sense’ that foreign countries will counterfeit mail-in ballots
The only top cabinet official who has echoed Trump’s concerns about the risks posed by mail-in voting is Attorney General William Barr.
“Right now, a foreign country could print up tens of thousands of counterfeit ballots, and it’d be very hard for us to detect which was the right and which was the wrong ballot,” Barr told Fox News last month.
On Wednesday, however, Barr admitted under oath in testimony to Congress that he has no evidence that’s happening, though he suggested it was “common sense” that mail-in voting would lead to fraud.
Senior Trump aide Stephen Miller continued the President’s line of attack on Friday, saying universal mail-in voting allows for “massive endemic fraud.”

Chris Krebs, who oversees voting security for the administration as the director of the Cybersecurity and Infrastructure Security Agency, recently all but dismissed the possibility of other countries trying to meddle this way because of the complexities of paper ballots.
“First off, getting special card stock, or paper, from a very small number of vendors that know their customers very well and if it shows up as, you know, the order coming from St. Petersburg and paying in rubles that might not clear the smell test,” Krebs said in a panel discussion two weeks ago with the Brookings Institution’s Dr. Fiona Hill, Trump’s former top Russia adviser. 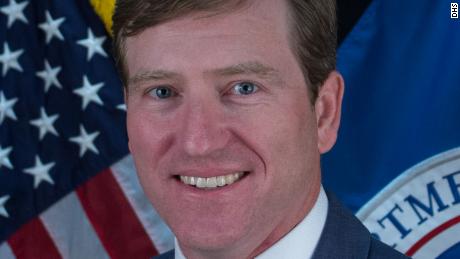 Krebs has been among the most vocal election officials urging states to do away with purely electronic voting in favor of paper ballots to guarantee an auditable paper trail. CISA routinely participates in the briefings led by Evanina.
“Understanding the different configurations of the ballots — printing them out the right way, getting the right signatures, which get checked on the back end” are all hurdles, Krebs listed, for any foreign country to interfere this way.
A spokesperson for CISA declined to comment further.
In a letter last month to the House Homeland Security Committee, Krebs and the head of the Election Assistance Commission, Benjamin Hovland, wrote that cyber attacks on voter systems do “represent a comparatively higher risk in a mail-in voting environment than an in-person environment.”
“Successful integrity attacks on voter registration data and systems have the potential to impact delivery of mail-in ballots and acceptance of voted ballots unless detected in sufficient time,” they added.
But in unclassified calls with members of the committee over the past few months, Krebs has not brought up his concerns about foreign countries using fraudulent mail-in ballots, a Democratic aide on the committee said.
“We have not had documented cases in any number of presidential elections about forged mail-in ballots or forged ballots,” said Rep. Sheila Jackson Lee, who attended a Thursday election security briefing. “If the President’s intelligence community or FBI has information, then they should present it to the Congress — plain and simple.”
Asked if she had heard those concerns over forged ballots presented by the intelligence community to Capitol Hill, Jackson Lee said, “I have not.”
Krebs has praised the cooperation with General Paul Nakasone, the director of the National Security Agency and Cyber Command, which play a critical role in thwarting and responding to foreign cyberattacks. He too spoke last week about the increasing capability of foreign adversaries to meddle in the 2020 election but also did not mention voting by mail.
“Our adversaries know that this is a means upon which that they can attempt to have an impact on us and so we’ve seen the growth in terms of programs across all those major adversaries,” Nakasone said, adding, “our number one goal, our number one objective at the National Security Agency and US Cyber Command is a safe, secure and legitimate 2020 elections.”
This story has been updated with details from a new assessment by the Cybersecurity and Infrastructure Security Agency.